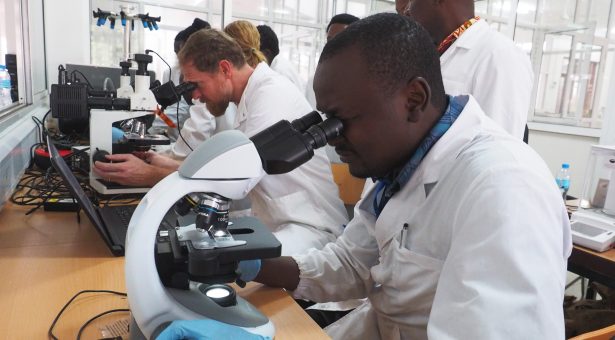 A visit to the Nelson Mandela African Institute of Science and Technology in Arusha, Tanzania, offered John Innes Centre scientists a chance to forge new international friendships and experience the routine realities faced by their peers in sub-Saharan Africa.

“There is a lot we take for granted here at the John Innes Centre – in Arusha, the temperature in the lab got up to 38°C and we were meant to be doing a room temperature incubation!” said Jenny Walton, a fourth year PhD student reflecting on the experience at the AfriPlantSci summer school. “It was fun and fostered a creative atmosphere and it was really great to see how engaged all the African students were. I came back with a renewed optimism in science.”

Jenny was joined by Javier Galdon-Armero and Eleanor Fearnley, both third year PhD students, who gained places on the BBSRC-funded summer school on Plant Metabolism for Improved Nutrition and Health. The summer school brought together a group of masters and PhD students from countries across sub-Saharan Africa with the aim of building networks among peers and trainers. Organised by Professor Giles Oldroyd, a project leader in the department of Cell and Developmental Biology at the John Innes Centre, the event aimed to cover the ‘breadth and depth’ of plant metabolism and how it applies to the improvement of plant and human nutrition.

The chance to network with project leaders and fellow scientists from Africa was particularly welcomed by the John Innes Centre PhD students. “Giles said at the beginning that he wanted to break down the barriers between project leaders and the students and I think that really helped,” said Eleanor.

The visit highlighted the daily challenges faced by their fellow participants. “We were lucky because it is one of the top biological science institutions in Africa. When you talk to the participants from other institutes they say they have even less equipment,” said Javier. “I talked to someone who said they have so many power-cuts that they cannot have any growth rooms. Something as basic as that – we just assume we will have a room where we can grow our plants. They don’t.”

Eleanor, Javier and Jenny all work on fundamental research in which the end product may be years away whereas at the summer school, young African scientists stressed the need for quick results for farmers.

“I do mostly basic science on developmental biology,” said Javier. “In Africa I was trying to explain why it was important and they would say, ‘but how is that going to help us and the farmers here?’”

Talking to African students lent perspective to the work back home at the John Innes Centre said Eleanor, “Every student you spoke to worked on projects that were much more applied than what we do. It felt like they were duty-bound to solve the problem now rather than years down the line and it did put our work into perspective. It makes you think about where the end use is.”

The course lived up to its promise to provide a ‘buzzing atmosphere’ and left a lasting impression, “My lab partner from Arusha is still emailing me and it’s really good we made those connections,” said Jenny. “I would recommend the summer school to everyone.”