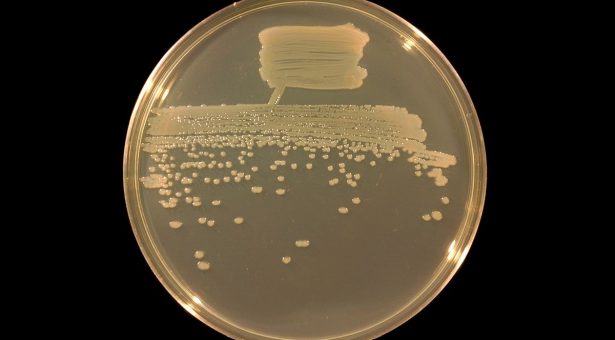 To the naked eye it seems lifeless, but the earth under our feet is a battleground on a microscopic scale, with very handful of soil harbours around 30,000 species of bacteria all fighting for precedence.

Soil bacteria in the genus Pseudomonas are constantly competing with other microbes to colonise the roots of host plants, fighting them with a suite of antibiotic compounds. But far from being noble defenders, they gain life-giving energy and nutrients from their host plants and simply don’t want to share. Dr Jacob Malone is working to understand and influence these microbial battles for the benefit of our crops.

Dr Malone explains, “Pseudomonads are out for themselves. Sometimes what they want coincides with what a plant wants, so they will fight off plant infections and protect the plant against stress, but ultimately they do it for their own gain.”

In the context of agriculture what they do is very useful. For instance, Pseudomonas fluorescens is capable of suppressing some important fungal and bacterial infections in crop plants, including potato scab, powdery mildew and take-all, a disease that can devastate wheat yields. Dr Malone’s current research focuses on establishing exactly which of Pseudomonas’ characteristics are important for its agriculturally beneficial interactions in the soil microbiome. A key challenge of this research is the vast genetic diversity seen within a single species; as little as 20% of the Pseudomonas genome is made up of ‘core’ genes, which control the basic systems common to all members of the genus. The huge number of ‘accessory’ genes vary drastically from strain to strain, conferring the ability to adapt to different environments and compete with different microbes.

The diversity of Pseudomonas populations in the soil can influence their ability to suppress crop diseases, although this relationship is not yet well understood. Recent work from Dr Malone and collaborators at Rothamsted Research suggests that wheat fields with lower levels of Pseudomonas diversity suffer less infection by take-all. It is not known why this correlation occurs yet, but Dr Malone speculates, “It could be that in Pseudomonas populations with low diversity, the most effective strains have somehow managed to reach precedence, while in more diverse populations these strains are outcompeted.” Interestingly, research in both wheat and other crops suggests that Pseudomonas strains that are better at defending plants against one particular pathogen also provide more protection against other diseases. Dr Malone continues, “The Pseudomonas strains selected by the more hostile environments appear to have a suite of more aggressive genes, containing effective tools for killing fungi as well as other bacteria.”

Just as changes in the soil microbiome affect crop health, different crops can also alter their surrounding microbial communities. Dr Malone and his collaborators recently showed that different cultivars of wheat have a substantial impact on the amount and the genetic diversity of Pseudomonas in the soil. “By picking one cultivar of wheat over another, farmers could be unknowingly influencing the outcomes of the microscopic battles going on in the soil, and potentially altering the health of their crops.”

Dr Malone hopes that the systems and principles he uncovers in these bacteria could be applicable to a broad spectrum of plant-microbe interactions, and Pseudomonas is one piece of this complex web of microbial interactions. Dr Malone says, “Understanding these bacteria and their surprising influence over crop health could inform new farming practices to fine tune beneficial microbial communities. By improving the effectiveness of these natural guardians, we could potentially reduce our reliance on chemical spraying to fight crop disease.

As a Postdoctoral Researcher investigating human infectious diseases, Dr Jacob Malone may not have foreseen that his research would lead to the John Innes Centre. His career transitioned when he was invited to speak at John Innes Centre’s annual Young Microbiologist Symposium, which attracts rising stars from a variety of related fields.

He explains, “I presented my work on infections by the bacterium Pseudomonas aeruginosa in cystic fibrosis patients, and they said, ‘This is great, but could you adapt this work to involve plants?’ Fortunately, Pseudomonas is a diverse genus of bacteria and so I was able to turn my attention to different species that can influence plant growth.”

As a newly appointed Synergy Lecturer at UEA, based at John Innes Centre, Dr Malone began to investigate Pseudomonas fluorescens, one of around 30,000 species of bacteria found in every handful of soil. Coming from a molecular biology background has been a strength to this multidisciplinary work, says Dr Malone, “We have developed some fairly complex mixtures of techniques to pick apart bacterial systems. Anyone coming into a field that isn’t their conventional research area will do some things differently, and I think that’s where our strength lies. I’ve learned an incredible amount and the new perspectives I’ve experienced have been illuminating.”