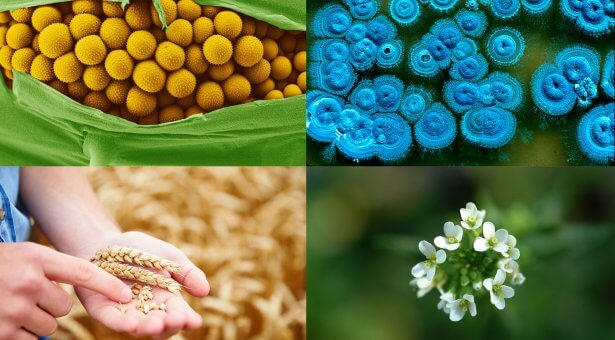 Our core research areas are funded by the UK Biotechnology and Biological Sciences Research Council (BBSRC) and directly address food security, human health and industrial biotechnology. To meet those objectives our research is organised into four Institute Strategic Programmes (ISPs)

Led by Professor Richard Morris, the Plant Health ISP will investigate the processes and mechanisms that promote plant health and crop resilience, focusing on advancing understanding of plant interactions with symbionts that benefit nutrient uptake and crop productivity, and pests and pathogens that limit crop yields.

The Plant Health ISP brings together leading researchers from the John Innes Centre and The Sainsbury Laboratory to unravel the molecular dialogue between plants and microbes, the establishment of the communication interface, and plant-microbe co-evolution. Building on this knowledge we will develop strategies for reducing crop losses and our reliance on agrochemicals that have negative impacts on the environment, thus enhancing agricultural yield and sustainability.

Using this new technique, and in collaboration with the National Institute for Agricultural Botany (NIAB) in Cambridge, the teams uncovered a dramatic shift in the population of yellow rust in the UK in recent years, largely due to an influx of fungal spores from outside the country. This information is essential to help breeders develop wheat varieties resistant to the range of yellow rust isolates, and will positively impact the sustainability of the UK arable industry

Genes in the Environment

The Genes in the Environment ISP, led by Professor Lars Østergaard, aims to develop a wider and deeper understanding of how the environment influences plant growth and development.

This research will provide a deeper knowledge of pathways that enable plants to adapt – over both short and longer evolutionary timescales – to environmental conditions. The research carried out under this ISP will be critically important for improving the stability of crop yields which are strongly influenced by changes in weather and other environmental factors.

Oilseed rape pods can open in the field and disperse their seeds. This process, known as ‘pod shatter’, leads to annual yield losses of around 15%, totalling roughly £165 million every year.

Professor Lars Østergaard and his team have studied fruit development in the model plant Arabidopsis. Previously involved in identifying the genes for Arabidopsis fruit opening, since arriving at John Innes Centre Professor Østergaard and his team have developed resources to translate knowledge of gene function in this model system to modify certain genes and improve pod shatter in oilseed rape.

Recently, in collaboration with Dr Vinod Kumar’s group at John Innes Centre, his team discovered pod shatter is accelerated at higher temperatures. Their current work is aimed at understanding the genetic mechanisms underlying this effect to inform the development of oilseed rape that is more resilient to climate change.

Our Molecules from Nature ISP, led by Professor Alison Smith, will investigate the vast diversity of chemicals produced by plants and microbes.

The chemical products of plants and bacteria already have a multitude of food, therapeutic, agricultural and industrial uses, but a vast wealth of potentially valuable products remains to be discovered and characterised.

Our research focuses on biological questions relevant to the discovery and design of new products, the improvement of methods of production and the development of new uses for existing and novel products. These biological questions include the nature of the products made by medicinal plants, the role of bacterial products in the interactions between soil organisms and plants, and the importance for human health of plant products in our diet.

The group has developed and exploited a highly efficient transient expression system, used to rapidly introduce and express genes of interest in plants, based on their discoveries about how viruses replicate in plants (the CPMV-HT, ‘Hyper-trans’, system). This system enables the rapid, high-level production of many proteins and chemicals in the leaves of a species of tobacco, that would otherwise be diicult to study and evaluate. These include valuable enzymes, a wide range of plant natural products, antibodies and virus-like particles.

For example, the group has produced virus-like particles (VLPs) that are identical to the ‘shells’ of disease-causing viruses including the polio virus and the bluetongue virus in sheep. These VLPs cannot cause disease, but they can be used as vaccines against the diseases and for the production of diagnostic tools. The group is also involved in projects with other Molecules from Nature researchers in which the CPMV-HT system is being used to analyse, manipulate and re-engineer plant biochemical pathways that produce chemicals with therapeutic or industrial uses. During the next few years, the use of this technology will expand and diversify further.

A new company adjacent to John Innes Centre on the Norwich Research Park, Leaf Expression Systems, will scale up the CPMV-HT system to produce far larger quantities of proteins and chemicals than presently possible. This will greatly facilitate research in Molecules from Nature and its translation into commercial products.

Coordinated by Professor Graham Moore, this ISP aims to develop new wheat pre-breeding germplasm characterised for the next generation of key traits. Building on this research these new wheat pre-breeding lines will be provided to crop breeders and the plant science community in a readily accessible and referenced form.

Wheat is one of the most important global crops – it currently provides 20% of the total daily calories consumed by humans worldwide. As the global population increases towards 10 billion people, it is anticipated that the world will need to produce 60% more wheat by 2050 to meet requirements. The demand for wheat is such that total production over the next 50 years will need to exceed the total wheat produced by humanity in the 10,000 years since agriculture began.

Since it takes between 15 and 20 years for current research to improve wheat varieties grown in farmers’ fields, it is imperative that we act now to address problems facing us in the future.