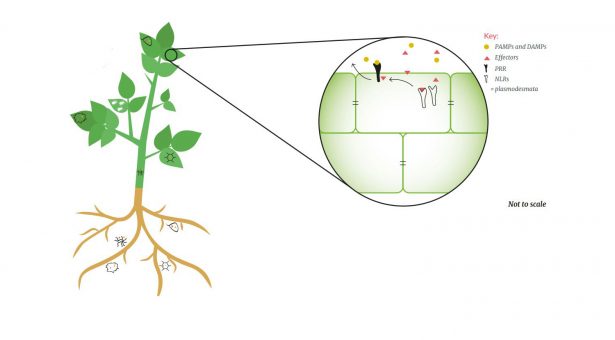 Just like us, plants must survive against pathogen threats, while recognising beneficial microbes.

Unlike us, plants lack a centralised immune system with special cells to fight disease. In plants, every cell must defend itself. Here are some of the microorganisms which plants must recognise alongside a simplified model of the current understanding of plant immunity.

Bacteria are microscopic, single-celled organisms. Similar bacteria can have both good and bad interactions with plants.

A virus is another type of microscopic organism, which replicates only inside living cells. Viruses can infect all types of life forms, from animals and plants to microorganisms, including bacteria and archaea.

The Kamoun lab, based at The Sainsbury Laboratory, has a long history of genomics-led research on oomycetes.

Like bacteria fungi can be a pathogen or symbiont for a plant. Pathogenic fungi are responsible for a variety of devastating plant diseases.

Dr Diane Saunders studies wheat rust pathogens. Recently her team with international collaborators (CIMMYT and Ethiopian Institute of Agricultural Research) developed a portable platform for diagnosing individual strains of yellow rust as they evolve in the field. This new technology is known as Mobile And Real-time PLant disEase (MARPLE) diagnostics.

Insects have a large impact on plant health. Last year, many brassica crops such as oilseed rape were devastated by the cabbage stem flea beetle.

Professor Steven Penfield’s group are looking to identify innate resistance to this pest. Insects can act as a carrier, called a vector, for pathogens. The BRIGIT program, led by Professor Saskia Hogenhout, which is investigating the spread of plant disease, and how insects act as vectors.