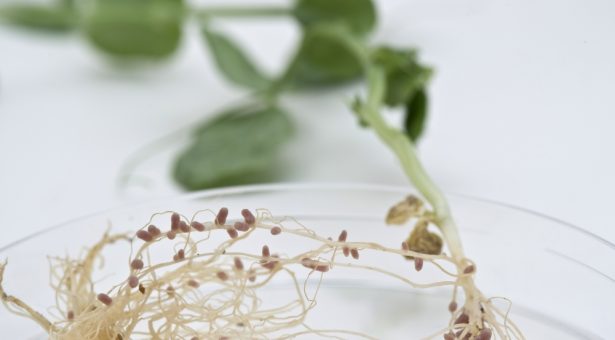 Globally, each year 120 million tonnes of nitrogen fertiliser is applied to crops worldwide to provide this nitrogen demand.

An incredible 48% of protein in the human diet comes from plants grown using artificial nitrogen fertiliser, but production and application of these fertilisers is unsustainable.

Some plants, such as the legumes, do not depend on these soil compounds or their chemical synthetics. Over thousands of years they have developed intimate symbiotic relationships with bacteria such as rhizobia. In exchange for sugars produced by the plant, these bacteria take nitrogen gas in the air and convert it into a form that the plant can use directly. This close entwinement of two biological organisms means that legumes get their nitrogen from the air rather than the soil.

Our scientists work on many aspects of understanding how this complex partnership occurs, with the aim of conferring the ability to fix nitrogen into crop species beyond legumes.

A step-by-step guide to nitrogen fixation