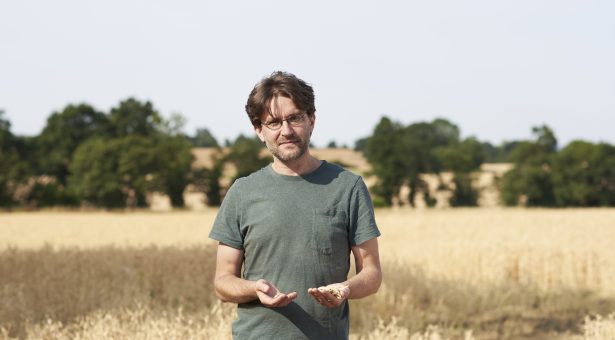 As one of the founders of the East Anglian-based company Hodmedods, he aims to bring British-grown peas and other pulses to our tables as a tasty alternative source of protein.

Dried peas are a versatile alternative, not just to meat but to most of the other pulses consumed in the UK which are imported.

“Mention pulses today and we all think of lentils, chickpeas and red kidney beans, but dried peas are by comparison forgotten. Yet they are just as versatile, just as delicious and you can use them in the same way as chickpeas with as good if not better results,” he says. “Our mission is to get people more interested in British-grown dried peas and pulses.”

“Peas are among the best-known vegetables. We are all familiar with fresh green peas and even more with frozen green peas, but as a dried seed that you eat they are very much the forgotten pulse,” says Saltmarsh.

A couple of generations ago, the diet of the masses was replete with colourful dried peas, a healthy source of protein in stews and savoury puddings. It was an indispensable way of preserving food through the winter in the days before freezers.

Now, a rainbow of colourful peas awaits rediscovery, says Saltmarsh, “There are yellow peas, which are mostly used to produce split yellow peas, fantastic for pease pudding but also for dals, soups and lots of other dishes. There are blue peas, which when you take their bluish skin off become a split green pea. And then there are Carlin peas, one of the more unusual varieties that we work with. They are an unusual dark brown; some of the varieties are redder, which we sell as Red Fox, and the darker ones we sell as Black Badgers, an old dialect name.”

Many of these varieties would have been well known in the British culinary past. For peas, there was a strong north-south divide. Carlin peas and other dark dried varieties were traditionally eaten predominantly in the north of England in a dish called parched peas served with salt and vinegar.

“They have a beautiful marbled appearance characteristic of this group of varieties, and have a lovely chestnut flavour,” says Saltmarsh. In the south the traditional way of eating dried peas was mushy peas.

For a business with a mission to bring dried peas to more people, it helps to have a dynamic living pea museum on your doorstep. The Germplasm Resources Unit at the John Innes Centre houses the national pea collection, supported by BBSRC. It is treasure trove for those looking to increase the diversity of their produce.

“We came to the John Innes Centre a couple of years ago and were shown round by the then keeper of the collection, Mike Ambrose. Mike showed us all these varieties, 3,500 of them. For us pea obsessives it was hugely exciting,” recalls Saltmarsh.

Two varieties of Abyssinian pea caught their attention – different subspecies of Pisum abyssinicum, which have been domesticated independently and have contrasting genetics. In Ethiopia these peas are highly prized and eaten only on feast occasions.

“They are beautiful peas and are nice to use,” says Saltmarsh. “One of the varieties has a black velvety appearance, the other a mottled olive colour. We just had to take advantage of the collection and request a handful to grow.”

They took some of each away and efforts are continuing to increase yields towards field-scale production. It’s hopefully just the start, says Saltmarsh, “At Hodmedod’s we’re always seeking new or forgotten crops that can be grown in the UK and add to the diversity of both British farming and our diets. Having the John Innes Centre on our doorstep is a source of much inspiration, expertise and knowledge. So far, we’ve only dipped a toe in the great wealth of its knowledge, but we hope to draw further on the possibilities as we grow the range of crops we work with in the future.”