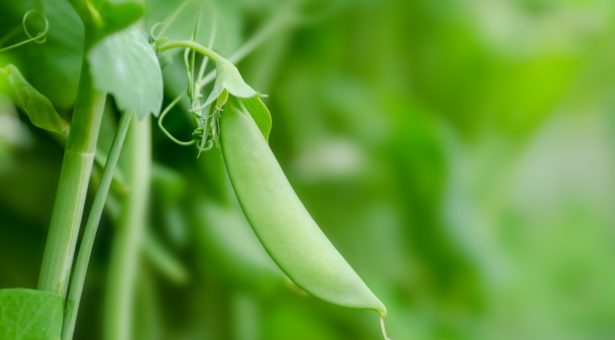 Many of the breakthroughs of research in pea at the John Innes Centre originate in fundamental research into genetics.

This was first initiated by Mendel, and furthered by Bateson and Saunders in the early days of the Institute. Research driven by curiosity still forms a significant part of the work of the John Innes Centre.

Other significant developments through the history of our research have their roots in confronting industrial challenges faced by both farmers and the food production industries. Here, we’ve selected two breakthroughs that have been instrumental in cementing the pea as a thread through the history of research at the John Innes Centre.

In the late 1960s, many vining pea crops were bypassed by harvesters because they were slow to harvest. The combine machinery couldn’t cope with the stalks and stems of the pea crop, and this lead to a demand for pea varieties with acceptable yields but less stalks and stems.

In response, research began at the John Innes Institute in 1969, led by Brian Snoad, to examine stalk and stem reduction and modification. Snoad and his team began by working to introduce two genes known for producing changes in the architecture and morphology into pea cultivars.

The genes they targeted replaced leaflets with branching tendrils (af gene) and greatly reduces the size of leaf-like appendage on leaves, called stipules (st gene). These effects were first observed in 1923 by scientists Pellew and Sverdrup at the John Innes Institute.

Throughout the 1970s, breeders in Poland and the UK were in communication with each other and concentrated on producing lines with shorter stature and differing amounts of foliage. The most extreme type – bred by Snoad and his team at the John Innes Institute – was the cultivar ‘Filby’. This variety incorporated both the reduced-size stipules and replaced leaflets with tendrils conferred by the af and st mutations.

This, the first fully ‘leafless’ UK cultivar, was released in 1978. Field trials of Filby were met with initial scepticism, but the studies revealed that reduced foliage not only helped alleviate the problems with harvesting, but also addressed three other problems within the pea crop.

The leafless pea trials showed that the less dense canopy meant that the peas matured in a more uniform way. This trait also decreased moisture levels below the canopy, reducing the susceptibility to pathogen attacks and, finally, it allowed a more accurate application of herbicides.

An arguably more significant, yet incidental, finding was that the additional tendrils led to an improvement in standing ability.

The tendrils allowed the plants to intertwine with each other to a much greater extent, producing a strong canopy architecture that was less prone to collapse. Vining and combining pea crop plants tended to collapse, which resulted in a slower and less efficient harvest, as well as reduced yields.

However, it was not all plain sailing for the ‘leafless’ pea. As time progressed, a study showed that ‘Filby’ had poor light interception, resulting in a reduced yield at harvest. Fully leafless types were only found to be advantageous when grown in very high densities and the additional seed cost was unattractive to farmers. Consequently, the ‘leafless’ cultivar was largely abandoned.

Scientists concluded that the ‘semi-leafless’ cultivar – which has tendrils instead of leaflets but retains the larger stipules – was the most suitable of the variant lines for crop use.

This research proved to be revolutionary for the pea industry; the enhanced standing ability led to reduced yield losses and increased the popularity of cultivated peas as a quality food and feedstuff, with the potential of reducing our reliance upon imports for plant protein.

The ‘semi-leafless’ pea can be considered one of the most important achievements in the history of pea breeding, and one of the most successful applied research outcomes of the John Innes Centre. This pea line addressed several problems facing the pea industry and, impressively, now accounts for 100% of UK dry pea production.

Extending the work on wrinkled peas and starch content throughout the 1990s, John Innes scientists identified and studied five mutants that influence the seed shape and starch content of pea seeds. One mutant has such a dramatic effect on starch that it produces ‘super-sweet’ pea seeds.

At the time of the mutagenesis programme, the genes at two loci that affect seed shape and starch content had already been identified. These were the r gene studied by Mendel and the rb gene. They both confer a wrinkled appearance to pea seeds and reduce the starch content of the seed due to the decreased activity of certain enzymes involved in starch synthesis (starch-branching enzyme and ADP glucose pyrophosphorylase, respectively).

Wang described how, much like Mendel, he spent years counting round and wrinkled seeds to separate the genetically wrinkled from the physiologically wrinkled to understand their genetics.

These rug3 mutants have extremely high sugar content, due to the severe reduction in starch synthesis, and yielded ‘super-sweet’ pea seeds that were also higher in vitamin C, which are highly desirable commercial traits.

By the end of the 1990s, we had identified the major enzymes involved in starch synthesis in pea, aided by the identification of the range of mutant alleles. The programme was successful as it developed an understanding of the enzymes and genetics involved in plant starch synthesis with potential for commercial use.