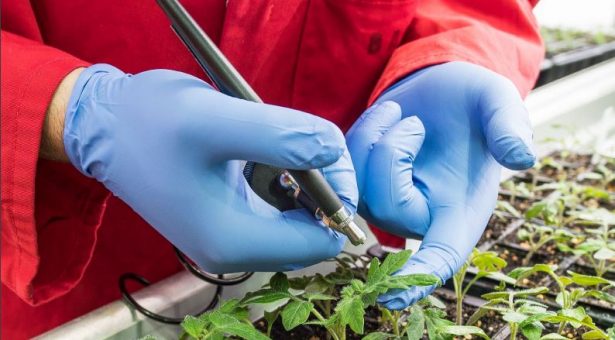 If you get a chest infection, you take an antibiotic to clear it up, but there’s a downside; with broad-spectrum antibiotics, they not only kill what’s ailing you, they also sweep away lots of helpful bacteria in your gut.

This same principle applies when killing bugs that affect our food production. Current measures to protect crops from persistent pathogens use similar blanket approaches. These involve spraying large areas with pesticides, causing significant environmental impacts including damage to the soil microbiome. Another approach, although less common, is to use antibiotics – for example, streptomycin is sprayed on kiwi fruit vines – but this contributes to the problem of antimicrobial resistance.

It is clear that something more specific, and less damaging is urgently required. New approaches that use precise methods are being developed in a partnership involving the John Innes Centre, the University of East Anglia, Folium Science and Rinicom, a company that develops agri-drone technology. One product that shows potential is a targeted treatment spray which has been developed using CRISPR-Cas gene-editing technology in a project funded by Innovate UK.

The technology uses CRISPR-guided vectors (CGVs), a harmless bacterium which hosts an edited DNA construct that is deadly to a specific pathogen.

“These CGVs are useful because they will only hit the thing you want to hit and they leave the rest of the environment untouched,” says Dr Jacob Malone. “What we have now is not shelf-ready, but trials in the glasshouse and laboratory have shown that the CGVs are highly effective.”

Currently, the use of gene-editing technology is restricted by regulations both in the European Union and some other developed countries.

Another promising avenue of research uses bacteria-killing viruses called bacteriophages. Malone’s group, together with Folium are working on a project to harness bacteriophages as a natural biocontrol agent. A major focus of this work is the widespread plant pathogen Pseudomonas syringae, which affects a range of fruit and vegetable crops around the world. It is responsible for tomato black spot, which causes yield losses due to reduced quality, and kiwi canker, a blight that has devastated kiwi crops across the world.

Pseudomonas syringae is a model bacterium widely used by researchers to make discoveries that can be applied to other organisms. It has 60 different strains, each of which varies in the effectors it secretes to infect plants.

All strains do the same thing: they kill cells. This prevents the plant from photosynthesising, causing symptoms of yellowing tissue and cell death. The pathogen lives off the materials secreted when the cells die.

Finding a smarter way of preventing this damage could bring huge economic and environmental benefits, says Ed Fuchs, the CEO of Folium Science. “The impact of this project and the development of a treatment spray will offer an estimated saving of £40 million to the UK fruit and vegetable industry. The global value of agricultural antibacterial products is £8 billion and is forecast to grow to £10 billion by 2022. Our Innovate UK-funded project will provide a more cost-effective and convenient solution.”

The partnership is also working on another bacterial pathogen, Xanthomonas, the cause of a serious blight affecting more than 400 species of plants. Once established, the bacteria can infect an entire crop within six weeks.

Staple world food crops such as rice, soybean and cassava have recorded yield losses of up to 75% due to Xanthomonas infection. In the UK it causes soft rot in brassica crops. Xanthomonas also affects grasses and is responsible for the destruction of amenities such as golf courses.

The John Innes Centre, Folium Science and the University of East Anglia are working with agri-drone technology developed by Rinicom which uses unmanned aerial vehicle (UAV) systems to detect sites of bacterial infection within a crop and to deliver a precise application of a guided spray to the area of local infection.

“Rather than having tankers full of bacteriophage or CGV product, which is costly, farmers will be sending out a drone with a couple of litres of product. It would target areas of infection around the field and wipe out disease where it’s emerging,” says Dr Malone. This may sound futuristic, but there are pressing reasons for why this sort of solution needs to happen quickly. Proposed European legislation means that in the next five or six years, many pesticides and herbicides will not be viable. This has major implications for the control of diseases, farmers will require a new range of effective treatments.

“There are going to be major changes because of the ban on pesticides, which is not to say that they should not be banned because they are very harmful in many cases and they are not sustainable,” says Dr Malone. “We cannot keep farming as we are or we will be looking at a desert within 30 years, proper ecological collapse. The microbiota, soil bacterial, fungal populations and insect populations are degrading and the more they degrade, the worse it gets. We must see changes in farming practices. If we want to fight plant diseases effectively in a way that doesn’t damage the soil, we need to have a highly targeted approach.”

Bacteria get sick too

A bacteriophage is a virus that infects bacteria and archaea. They are diverse and abundant, living wherever bacteria exist. The use of bacteriophages as therapies for bacterial infections is well known, and it is hoped that they can provide part of the approach to solving the growing problem of antimicrobial resistance.

Using synthetic biology techniques researchers can engineer bacteriophages for use as a natural biocontrol agent against a range of harmful bacteria. This means we can protect crops without extensive use of chemical treatments.