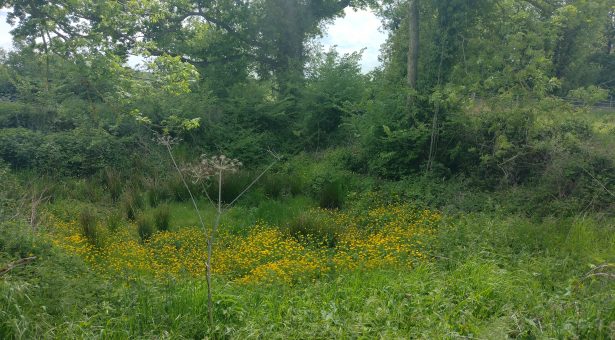 Our research aims to address global challenges of food security and human health. All of these link closely to the work carried out at Church Farm, as our field trials may be investigating how we can sustainably increase the yield, or to provide crops that are resilient to environmental fluctuations, and/or requiring inputs that are low carbon.

Church Farm provides experimental crop trials where researchers can study how plants grow and develop in the fluctuating conditions, whilst also providing an important home for wildlife.

So, in parallel to our experimental trials we aim to provide havens for wildlife by linking a variety of habitats including hedgerows, wildflower meadows, grasslands and ponds.

Our hedgerows and wildflower meadows are maintained by Morley Farms Ltd, a  farming company that lease and use the land not being used for experimental trials.

In the future we would like to monitor the diversity of wildlife at the farm and continue to develop our wildlife friendly initiatives that could benefit the environment and our research.

In 2019, six hectares of a field called ‘Broken Back` was sown with wildflowers and fine grasses to create a meadow. Because of its north facing slope and very sandy soil which is dry and prone to erosion this land was not productive for growing crops.

At the time there were no government incentives for this kind of activity, but David Jones the farm manager (Morley Farms Ltd) took the decision that it would be financially and environmentally better to set this land aside for wildlife.

This seed mix established a mixed grass and wildflower meadow, that now provides a wonderful source of pollen and nectar for insects throughout the summer, the fine grasses hold the soil together preventing erosion and it provides a refuge for wildlife. Insects will in turn provide food for many bird species as will the seed heads which are an important winter food source.

In the summer, the meadow hums with the sounds of bees and insects, and many butterflies can be spotted such as the Common Blue.

Many crop species require insects for pollination. Oilseed rape which is grown at Church Farm is pollinated by a variety of insect species including honey bees and bumble bees. Insect pollination has been shown to increase the number of seeds produced and the oil content of the seeds.

The wildflower meadow supports insects, that are not pollinators but are beneficial to our crops; predatory ladybirds, hoverflies, and parasitic wasps can help control aphids and other pest species.

Wildflowers are also planted in the beds beside the Dorothea de Winton Field Station.

Wet habitats, given the chance, are rich in wildlife. At Church Farm there are several ponds, most of which dry out each year.

Ponds like this, are known as temporary ponds, and they provide an important habitat for wildlife, often supporting scarce species.  Because they dry out each year these ponds are unable to support fish, which means that tadpoles and aquatic insects can thrive.

The ponds on Church Farm are the result of the extraction of a lime rich clay (marl) which was used for unfired ‘clay lump’ for traditional buildings and for soil improvement in the past. Over time, these extraction pits filled with water and became great wildlife habitats, supporting diverse species.

However, this diversity declines as ponds become overgrown. As trees and plants become established, growing taller they start to shade the pond.

When a pond becomes shaded by lots of trees and shrubs, the aquatic plants start to decline through a lack of light. This reduces the availability of feeding, hunting, and hiding habitats for insects and invertebrates.

Added to this, the fallen leaves and branches leads to considerable decomposition of organic matter, decreasing oxygen levels in the water.

In March 2020, two shaded and overgrown ponds were cleared. This included removing some trees to let light back in and built-up pond sediment was removed.

A new pond was also created to attract Great Crested Newts – find out more about this project in our blog – Rewilding ponds at Church Farm .

This mix of existing, managed and newly created ponds creates conditions suitable for a wide range of wildlife suited to differing levels of shading, oxygen levels and aquatic plant coverage.

This autumn (2022) thanks to Easton College students, we cut back an encroaching white willow from the side of the pond.

The second, shallower, pond remained dry all summer but had a beautiful carpet of buttercups in early summer. The newly created pond dried up by late summer but was clearly a popular watering hole up until then as told by the varied animal prints seen in the mud.

The two restored and the newly created pond are adjacent to ‘Pond Field` an area of damp, poor soil where the grassland is minimally cut. Bee orchids grow here. A log pile (hibernaculum) has been built next to the ponds for overwintering amphibians and reptiles. Extensive hedgerows lead away from the ponds enabling species to move between habitats, including other ponds to find areas to feed, migrate, take refuge, and hibernate.

Taking advantage of the dry summer of 2022, another shaded woodland pond was cleared of ancient rubbish by volunteers from the John Innes Centre leaving the pond more attractive and safer for wildlife.

Native ash trees are an important part of the landscape in England, but they are suffering with the spread of ash-dieback disease. Ash dieback is a fungus originally found in Asia where it is a leaf pathogen but causes little impact on Asian ash species. It was first identified in Europe in Poland in 1992, but on its new host, the European ash tree,  it is an aggressive pathogen causing widespread damage and eventual tree death.

Ash dieback in the UK was first identified using molecular methods by Dr Anne Edwards from trees in an ancient woodland in Norfolk in 2012 after spotting dying leaves, wilting shoots and dark lesions on the stems of regenerating coppice Ash dieback research at the John Innes Centre

Discussion amongst scientists from the Norwich research Institutes on how to tackle this disease led to the formation Nornex a network of eleven research institutes aiming to research the fungus and the large variation seen in tolerance to the disease by ash trees. Importantly all data was made open access which led to further collaborations and publications.

In 2016 Nornex  published its final report. They had identified genetic markers in ash DNA which strongly predicted inheritance of disease tolerance. The fungus strains in the UK were found to be a small subset of the total and the different strains varied in their disease-causing capacity. Research has continued at John Innes Centre by Professor James Brown who studies fungal diseases including  Ash dieback. Research also continues at Kew Gardens and at St Mary’s, University of London with the Ash Tree Genome Project.

Eleven miles from where the disease was first identified, a new copse of potentially tolerant ash trees have been planted in a corner of Pond Field at Church Farm.  Dr Anne Edwards had collected ash seedlings that are the progeny from ash trees that appear to have strong tolerance to ash dieback. In November 2022, with the help of Easton College students, 50 of these ash trees were planted with view to being both a wildlife habitat and a future research project as a genetic resource to study susceptibility to ash-dieback.