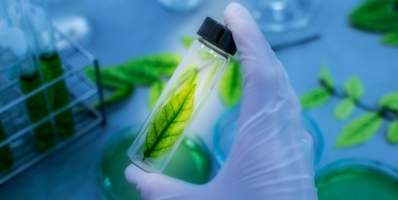 Resistance to fungicides is increasing. Each year UK wheat farmers can lose 30% of their yield to infection by a single fungus, Septoria.

Professor James Brown and his team broke the connection between Septoria resistance and a reduction in yield (yield penalty) which had hampered breeding efforts. Using the new molecular markers, plant breeders have developed more durable Septoria resistant wheat, reducing the dependence on chemical control with fungicides.

The reasons for the annual battle and the dependence on fungicides originate in the 1980s. Breeding between 1980 and 2000 prioritised dwarfed, high-yielding wheat. Professor James Brown then discovered in 2002 that selecting for yield also unintentionally selects for susceptibility to Septoria. From 2001 resistance to key fungicides also started to become a serious problem.

Professor Brown discovered that most breeders were relying heavily on a single source of resistance. From 2004 he began publishing data on new sources for resistance to Septoria which do not carry a yield penalty. He produced genetic maps revealing the location of resistance genes in wheat cultivars used for breeding. He made molecular markers available to make the breeding faster and cheaper.

The discovery by the Brown Group that Septoria tritici blotch resistance in wheat followed a gene-for-gene interaction overthrew previous dogma and revolutionised the genetics and breeding for this disease.

Furthermore, the follow-on discovery that many commonly used resistance genes carried a yield penalty is now enabling breeders and researchers to carefully choose new resistance genes that enhance both resistance and yield potential to this devastating disease.