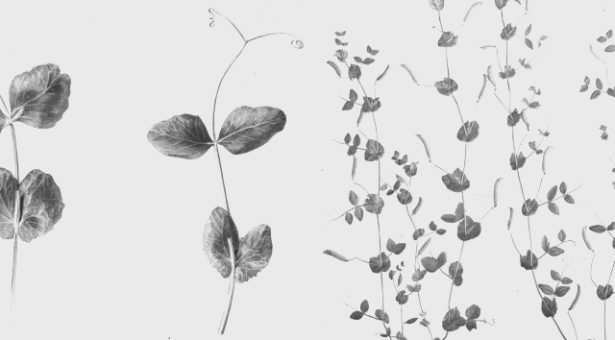 While working on inheritance in peas in the early 20th century, William Bateson and Caroline Pellew were approached by Suttons Nursery in Berkshire with a problem; there was a tendency for their high-class garden pea varieties to produce unusual rogue plants.

Suttons asked the John Innes Institute if they could breed rogue-free strains of commercial peas.

The term ‘rogue’ is applied by British seed growers to any plant that has undesirable variation from the standard.

Bateson and Pellew focused on the ‘rabbit-eared rogues’, which exhibit reduced, dark green pointed leaflets and stipules that resemble rabbit ears. They also have smaller pods and seeds with a distinct bitter flavour.

Bateson and Pellew observed that, when crossing rogues with normal peas, the offspring were always rogue. When they then crossed this progeny with normal plants, they should have yielded a mix of normal and rogue plants, but instead, subsequent generations were all rogue.

This was something entirely new and fascinated geneticists as it defied the principles of Mendelian inheritance; it appeared that rogue alleles were turning non-rogue alleles into rogue alleles.

This was in fact the first detailed description of a phenomenon later labelled as paramutation, which allowed the rogue peas to break Mendel’s rules by behaving epigenetically.

Paramutation lies within the realm of epigenetics which more widely describes how observable traits may result from external factors – such as environmental or diet-related – which turn genes on or off, and affect how cells express a gene. It refers to an interaction between two alleles at a single locus where one allele induces a heritable change in the other.

The DNA sequence remains unaltered; instead the change is due to chemical modifications of DNA or proteins, e.g. DNA methylation, histone modification or genetic silencing, which alter how information encoded in the genome is regulated and interpreted.

Epigenetics and paramutation can result in organisms having identical DNA sequences but radically different observable characteristics. For instance, a study on rogue peas from America in 1930 described a lack of differences between the chromosomes of rogue and normal peas, yet confusingly they look completely different.

Kenneth Dodds and Peter Matthews reopened the case of rogue peas at the John Innes Institute during the 1960s, in which they re-examined rogue inheritance and attempted to correlate the unusual inheritance patterns with molecular changes in DNA methylation. Matthews completed his PhD on rogue peas in 1973, when he tried to identify the underlying mechanism but to no avail.

Pereira and Leitão compared a rogue line from our pea collection (JI2723) with a normal variety in order to investigate the molecular mechanisms that underlie the establishment, maintenance and inheritance of rogue traits.

The results showed that specific genome sequences exhibited altered methylation patterns, which in some cases were inherited by meiosis to pollen DNA. The findings were described as ‘very promising’, with potential for further work.

Plants have provided ideal systems for epigenomic research, and plant biology has made significant contributions to the discovery and study of various epigenetic phenomena.

Since paramutation was first observed in pea, similar interactions have been found in other plants such as maize and mice.

There is also evidence that paramutation-like phenomena could be involved in some human diseases that can exhibit non-Mendelian inheritance such as diabetes and cancer.

Bridging the divide between nature versus nurture, there has been increasing interest in epigenetic phenomena in recent years. Hopefully the additional research and data will shed further light on the extent and mechanism of paramutation, and eventually the mystery of rabbit-eared rogues will be solved.