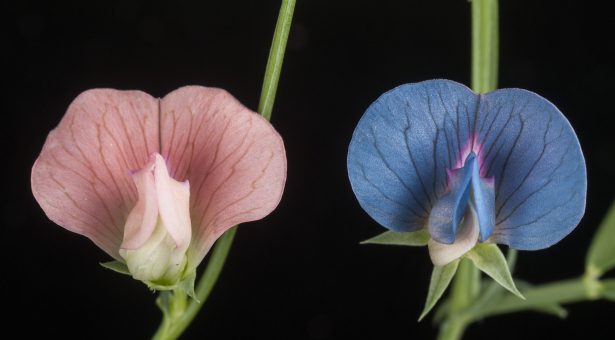 The appearance of food is considered to be of extreme commercial importance for the human consumption market.

In particular, colour influences the mind of a consumer when selecting food and beverages, so the fruit and vegetable industry seeks specific bright and uniform colour in its products.

Pea seeds naturally appear in a variety of colours from shades of yellow to dark purples, but it is the vibrant green pea that has been exploited widely for food. However pea seeds can lose their green colour at or after seed maturity. In some cases, growers have a very limited window for harvest when seed is at its optimum and a delayed harvest can result in dramatic economic loss, with decreases in value of up to £50 per tonne. Therefore, there is a great need for higher seed colour stability within the pea crop.

Historically, selective breeding has been used in order to achieve the desired visual appearance of fruits and vegetables. However, it was not known which specific genes were involved.

In the 1800s, Mendel investigated the inheritance of the ‘factors’ responsible for the colour of peas: he studied the segregation of yellow and green pea seed cotyledons as well as the colour of the outer seed coats.

It is now known that the green colour of mature pea seeds is due to the abundance of chlorophyll (a central component of the plant photosynthetic machinery). Furthermore, the trait studied by Mendel which relates to cotyledon colour is now known as the ‘stay-green’ trait in many plant species and is controlled by the ‘stay-green’ gene (SGR).

The proteins encoded by SGR are involved in a pathway responsible for the breakdown of chlorophyll and the subsequent loss of green pigmentation. This causes the yellowing of mature pea seeds and, in other plants, leads to leaf colouration change during autumn.

Conversely, there are mutations that can disrupt this pathway, so that chlorophyll content and ‘greenness’ can be retained.

Our scientists identified a gene in pea, very similar to SGR, which they aptly named SGR-like (SGRL).

Increasing the understanding of how SGR and SGRL relate to chlorophyll metabolism during growth and development could lead to enhanced pigment retention and colour stability. Ultimately, this may lead to a reduced need for additives which are applied by industries to achieve desired colours.

Furthermore, the researchers observed how SGRL is also critical for normal plant growth as it maintains photosynthetic efficiency. They observed that SGRL is responsible for sustaining and recycling chlorophyll and that the relative activity of SGRL in pea is light-dependent.

Our scientists found that the removal of SGRL, when the pea plants were grown in high light conditions, dramatically reduced photosynthetic efficiency, stunting growth and limiting yield.

They used a novel and efficient technique of transient gene expression, developed by Professor George Lomonossoff that has revolutionised gene discovery.

The genes of interest (SGR, SGRL) were injected into living plant leaves of Nicotiana benthamiana where they were expressed over a few days.

Using this technique they were able to identify the distinct functions of SGR and SGRL genes and their variants very quickly, compared to using the traditional methods of multi-generational cross-breeding.

With this knowledge of SGRL, scientists hope to optimise its function in the pea crop. We hope that, by altering the SGRL protein and traditional breeding, there is the potential to increase pea seed yield.