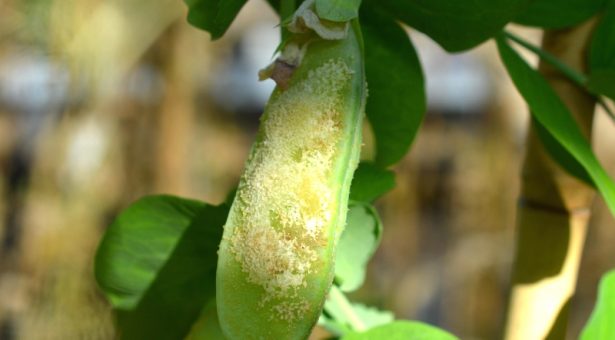 Following a two-decade gap, the John Innes Institute pea programme experienced a revival in the 1960s.

Kenneth Dodds, Director and Head of the Applied Genetics Department, was under pressure to find an area of research unique to the Institute and settled on pea and started collecting pea seeds from around the world.

As with all new collections, time was initially spent observing and making notes on unusual and bizarre variation. One peculiar characteristic that stood out was ‘neoplastic pods’.

John Innes Institute scientists, including Dodds, Peter Matthews and Brian Snoad, observed how some of the pea pods from their new collection developed pustular-like growths on the outside of the pod.

These growths, referred to as ‘neoplasms’, are due to abnormal and uncontrolled cell division, which can develop to form a tumour.

Almost simultaneously, scientists in America identified that neoplasms in field pea were caused by a dominant mutant gene that they named Np. Dodds and his team continued to observe neoplastic pods in pea material from all over the world (including Ethiopia, Uganda, Kenya, Israel, Turkey and Peru), concluding that the Np gene was in fact very common throughout the pea genus.

The John Innes Institute scientists focused their attention on determining the cytology of neoplastic growth, as well as the potential triggers of this phenomenon.

The amount of neoplastic growth on pods was found to vary depending on environment; low expression was observed when the pea plants were grown in a field rather than a glasshouse. This led scientists to believe that types of light may affect neoplastic pod growth, since glasshouses filter out UV light.

With the assistance of fluorescent lamps and high-pressure mercury vapour lamps, they established that UV light can inhibit neoplastic growth on pea pods.

Alternatively, when UV light was absent, neoplasms were more abundant. When grown in the right environment, the pustules could be so numerous that they would combine to cover the entire pea pod.

Snoad and Matthews conducted further research to determine where on the pod the neoplastic growths develop.

Using microscopic examination, they became the first to accurately locate and describe the anatomy of the cells within the active region, and to recognise the earliest signs of tumour development and the growth mechanisms involved.

Recently, this research has been taken further by scientists in America, who have identified that neoplasms can act as a remarkable defence mechanism against pea weevils, an economically important insect pest of the pea in many parts of the world.

Ordinarily, pea weevils deposit their eggs on the pea pods and the larvae then burrow through the egg into the pea pod, where they can reach the immature seed.

The scientists identified that there is an insect-derived chemical signal, which stimulates cell division and promotes neoplastic growth, most notably in Np lines of pea. Organic compounds produced by pea bruchids are responsible for this stimulatory effect and are referred to as ‘bruchins’. Subsequently, the neoplastic tissue displaces the eggs and the larvae can no longer directly burrow into the pod.

Scientists in Sweden have suggested that intercropping pea crops with taller crops, such as sorghum and maize (Zea), could further help minimise the success rate of pea weevil larvae entry into developing seeds by increasing neoplasm growth. This is based on our scientists’ observations of the effect of light wavelengths on neoplasm formation; intercropping increases shading and reduces the exposure of pea plants to UV light which promotes neoplasm formation. The additional neoplasms provide an extra barrier against pea weevil attack.

The breeding of the neoplastic pod trait into different pea varieties has the potential to contribute to resistance against pea weevils and it could contribute to alternative and sustainable approaches to currently used chemical pesticides and insecticides.