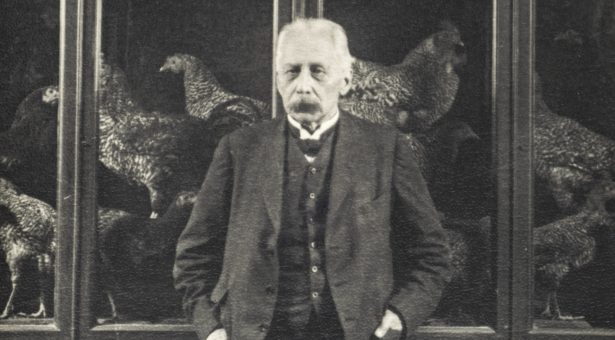 William Bateson pioneered the science of genetics in Britain and became the first Director of the John Innes Institute in 1910.

Bateson gathered around him a group of enthusiastic young scientists to tackle the challenges of inheritance in plants, aiming to apply Mendelian theory to breed new varieties to benefit both genetic research and agriculture.

The early research on pea at the John Innes Institute was predominantly conducted by Bateson, Caroline Pellew, Aslaug Sverdrup and Dorothea de Winton, with the latter three continuing the research after Bateson’s death in 1926.

Initially the research followed up Mendel’s work using crossbreeding and hybridisation experiments to demonstrate Mendelian principles, extending the analysis to combinations of traits.

Around the same time as Bateson and his team were researching the pea at the John Innes Institute, a team of scientists in America – led by T.H. Morgan – were developing the revolutionary chromosome theory.

Their theory recognised that ‘factors’ (genes) are arranged on linear chromosomes, and that each gene has its own particular location (locus) on a specific chromosome.

Bateson principally focused on studying unusual rogue peas and linkage, in order to try and disprove the chromosome theory. The rogue peas proved to disobey all known patterns of inheritance and the detailed reports by Bateson and Pellew of rogue peas were in fact the first analyses of an epigenetic phenomenon called paramutation.

The research was continued by Sverdrup and de Winton who came to the conclusion that the number of linkage groups in pea was larger than the number of chromosomes. Therefore, the chromosome theory was not supported by these findings.

In 1922, T. H. Morgan and his fruit fly (Drosophila) team visited London to attend a series of demonstrations at the Royal Society, and again at the annual meeting of the Genetical Society, which was held at the John Innes Institute.

While Bateson remained sceptical, Punnett – a collaborator of Bateson’s – retracted any doubt he had in the chromosome theory. Punnett published a complete genetic analysis of the sweet pea in the ‘Journal of Genetics’ in that same year, and the results were consistent with the chromosome theory of linkage.

Towards the end of his life, Bateson did come to partially accept chromosome theory, but remained sceptical, arguing its inability to completely explain inheritance.

In Bateson’s last paper -published just before his death in 1926 – he expressed his continual criticism of the chromosome theory and concluded that its acceptance should be delayed. Despite this, Bateson was pivotal to the development of genetics as a scientific discipline and he is regarded as one of the greatest early advocates of Mendelian genetics.

Bateson’s colleagues at the John Innes Institute made many other investigations concerning the genetics and cytology of peas over the following decades. Their initial research on peas provided the foundation for the long legacy of pea research at the John Innes Centre.