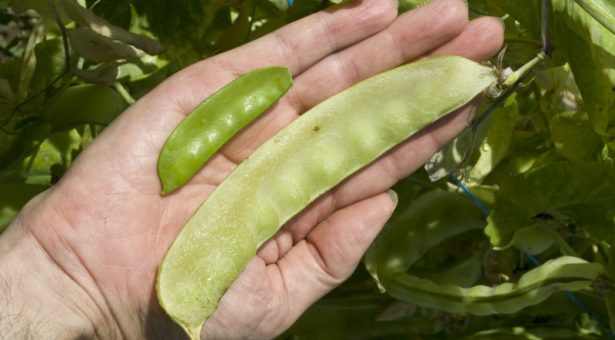 During the summer of 2009, Mike Ambrose identified what we believe to be the world’s largest pea pod.

We are custodian of a number of key germplasm collections, including the second largest collection of pea germplasm in Europe. The mangetout was an old Spanish variety (JI 2144) and was added to our Germplasm Resource Unit pea collection in the 1970s.

Our collection had humble beginnings with John Innes Centre director, Kenneth Dodds, starting it by collecting a small number of lines from around the world in the 1960s. The seed catalogues were provided by university departments, botanic gardens and collectors. Dodds was so fascinated by the genetic variation that it became a hobby during his free time.

Dodds later passed on the responsibility for the collection to Brian Snoad, who studied the pea germplasm cytologically and genetically.

The collection began to grow in size and in 1970 Snoad established the first computer-based information retrieval system for a pea gene bank, which catalogued pea genotypes and phenotypes.

As well as conserving diversity, the gene bank contains valuable information and source material, which serves to combat a range of agronomic problems and produce novel products or new market types based on genetic variation.

Seeds are available on request to research, academic and commercial companies and the resource has been central to many of the successful pea research studies carried out at the John Innes Centre.

Pea seeds last for approximately 30 years, under the conditions at the Germplasm Resource Unit. This means that the seed stocks of all the accessions need to be renewed and replenished every 15-20 years in order to maintain the collection in a viable state.