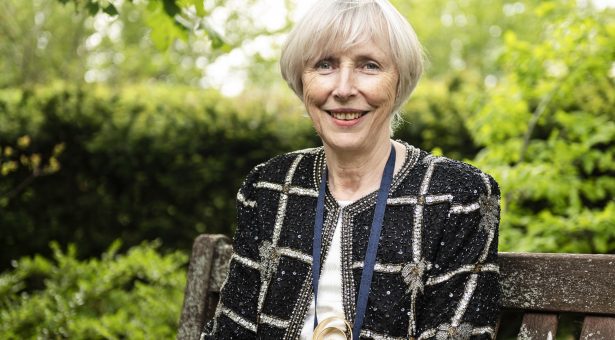 Professor Dame Caroline Dean has joined some of the world’s most eminent scientists in receiving honours from the Wolf Foundation.

Professor Dean has received the Wolf Prize in Agriculture for her ground-breaking work on flowering time regulation and the epigenetic basis of vernalization.

The prize was announced early in 2020 but due to the coronavirus pandemic the award ceremony was delayed, and Professor Dean’s medal was presented in May 2021.

A Wolf Prize Awards Ceremony announcing the honours for 2020 and 2021 was broadcast on Monday 28 June with notable participants including President of the State of Israel Reuven Rivlin who is chair of the Wolf Foundation.

The Wolf Prize in Agriculture is one of six Wolf Prizes established by the Israel-based Foundation and awarded since 1978.

Considered the equivalent of a “Nobel Prize in Agriculture,” it marks another milestone in the highly influential and pioneering career of Professor Dean.

On the announcement of the award John Innes Centre director Professor Dale Sanders (FRS) said: “Caroline’s work has provided many significant breakthroughs of profound importance in the field of biology. She is an outstanding scientist and a fantastic role model, and I take great pleasure in congratulating her on receiving this prestigious award.

“The Wolf prize recognises Caroline’s contribution to our understanding of how plants sense and remember winter, and how this is critically important to agriculture in the face of a changing climate.”

The Wolf Prize is awarded annually to prominent scientists and artists for their unique contribution to humanity.

Professor Dean is one of nine laureates to receive awards in the fields of agriculture, arts, mathematics, medicine, and physics for 2020, and they were joined by six laureates for 2021

“It is truly an honour and privilege to receive this award alongside such distinguished figures from the world of science and the arts. I’m grateful to collaborators and colleagues who have contributed to my scientific journey over many years,” she said.

The 2020 announcement included the joint award for Medicine to Professor Jennifer Doudna (University of California, Berkeley) and Professor Emanualle Charpentier (Max Planck, France) who together led the discovery of the revolutionary gene-editing tool CRISPR.

Professor Dean’s research over a 32-year-career at the John Innes Centre has focussed on two central questions in plant biology: Why do certain plants have to pass through winter before they bloom, and how do they remember that they have been exposed to cold temperatures?

These fundamental questions have been the cornerstone for increasing the yield of agricultural crops in temperate climates.

Professor Dean has been a strong advocate for women in science and a committed role model and mentor.

Wolf Foundation laureates are selected by international juries that are reappointed every year and consists of world-renowned professionals in their field.

Since the Foundation was established, 345 scientists and artists have won Wolf prizes.

It was founded by the late Dr Ricardo Wolf, inventor, diplomat and philanthropist, together with former Israeli President Ephraim Katzir and Prime Minister Yitzchak Rabin.