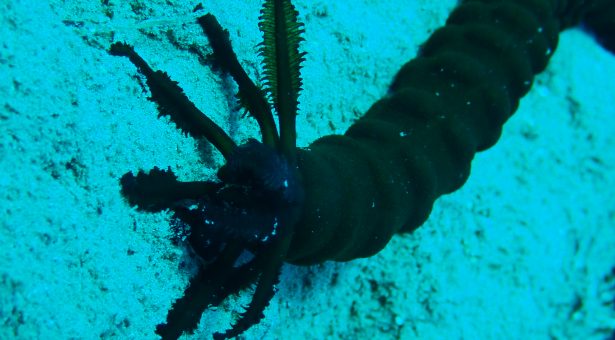 Genome mining techniques have helped to explain how sea cucumbers produce defensive chemicals that enable them to fend off foes in the murky depths.

Sea cucumbers are a food delicacy in south Asia where their cultivation is a multi-million-dollar industry. The molecules they produce to defend their ecological niche at the bottom of the ocean are highly valued for their medicinal properties.

These curious marine animals produce a category of molecule known as triterpenoid saponins which are widespread in plants, but rare in animals.

Until now the question of how they evolved their unusual ability to produce these molecules has been unexplained.

An international research collaboration investigated the genome of sea cucumbers and compared them with the genomes of other Echinoderms, such as sea stars and sea urchins.

Analysis showed that an enzyme found across all kingdoms of life that makes sterols, essential for building membranes and hormones, was missing in sea cucumber.

In sea cucumbers this sterol-producing function had been diverted to produce two new genes in this enzyme family. Using molecular biology, the researchers isolated the genes, transferred them to yeast and analysed the extracts.

This showed that the genes have acquired new functions; one of them makes an alternative type of saponin that the sea cucumber uses for self-defence, and the other produces molecules that protect the creature from the toxic effects of its own chemicals.

Chemical analysis showed that these genes, required for the synthesis of self-defence compounds were expressed more in the outside layers of tissue.

The next stage for this research is to find the remaining chemical steps necessary to make these potentially high value chemicals so that they can be produced using plants or yeast more cheaply and help conserve sea-cucumbers in their natural habitats.

Saponins are widespread natural products, with more than 20,000 reported. They have a wide range of uses, traditionally as a source of soap and more recently as vaccine adjuvants, foaming agents, antifungal treatments and emulsifiers.

Many animals use toxins as chemical defences – usually  obtained from food or produced via symbiotic relationships. Echinoderms, in contrast, biosynthesise their toxins themselves.

Professor Anne Osbourn, a group leader at the John Innes Centre, and corresponding author of the study said: “Sea cucumbers are massively important in Asia as a health benefiting food source and for traditional medicines. So, if we can understand how their molecules are made we can make these high value compounds without needing to grind up sea cucumbers. We can make them using plants or yeast.”