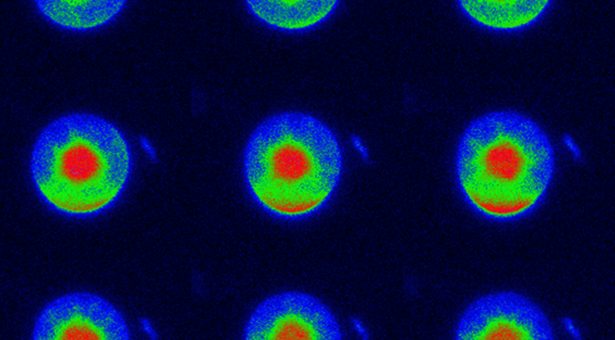 In plants, many proteins are found at only one end of a cell, giving them a polarity like heads and tails on a coin.

Often, cells next to each other have these proteins at the same end, like a stack of coins with heads all facing up. This protein patterning is critical for how plant cells orient and coordinate themselves to produce the leaves, flowers, stems and roots that adorn our gardens and provide us with all our food and the oxygen we breathe.

Previously it’s been unclear how this head-to-tail protein patterning is produced: can it arise within each cell, or does it depend on a collective effort of many cells working together?

A new paper, published in Current Biology has found that even cells in isolation can become polarised to create the head to tail pattern, and that this polarity can orient how the cell grows.

The team, from the Coen lab, studied a protein called BASL that is normally found at only one end of the cells giving rise to leaf pores. By tagging the BASL protein with fluorescence and introducing it into cultured plant cells they could see where the protein went.

They showed that even if the cells were stripped of their walls, to create membrane-enclosed spheres, the BASL protein went to only one end of the cell, forming a cap. Time-lapse movies showed that position of BASL labelling changed over time, like a polar ice cap wandering over the earth’s surface. However, when cells reformed their walls, the BASL cap could become fixed, and cells elongated into sausage shapes, with the cap remaining at one of the rounded ends.

Lead author Dr Jordi Chan says, “It was incredibly exciting to see polarity in isolated plant cells for the first time. It was like seeing a boring-looking planet suddenly light up to reveal a cap, and then elongating while keeping the cap at one end.”

The results show that cell polarity can arise within cells and likely orients their growth. Signalling between cells may then coordinate polarity, aligning the heads and tails of different cells in a tissue, guiding how they grow collectively and develop into a plant.

The paper; ‘Intrinsic Cell Polarity Coupled to Growth Axis Formation in Tobacco BY-2 Cells.’ is published in Current Biology.