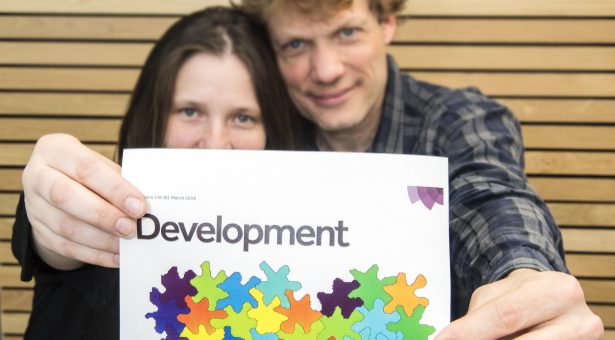 It’s one of the major challenges of biology: how to accurately quantify the mass of swarming, shifting shapes that make up the matter of life.

Such shapes carry vital clues about stages of development, differences in growth conditions and indicate molecular changes that might signify disease….if only they can be captured and quantified.

Now the labs of Dr Veronica Grieneisen and Dr Stan Marée at the John Innes Centre have devised an ingenious method of measuring those elusive life forms thanks to some serious mathematical modelling and a little musical inspiration.

The novel technique – called LOCO-EFA – features today on the front page of the Company of Biologists journal Development. It is already being enthusiastically taken up by international teams of researchers who intend to use it to quantify cell and leaf shape and even paleontologists investigating the evolution of organism shape.

In musical terms, says Dr Veronica Grieneisen, whose fascination with music helped shape the study, the team has found a way of analysing complex shapes that delivers not only the basic sound but its subtlety, depth and harmonic range.

“We’ve shown that any simple or complex cell shape can be captured like music by its pitch, amplitude and timbre,” she explains.

“The end-result is that we can now mathematically capture directly recognisable biological features from any kind of two-dimensional shape, allowing us to compare and contrast shapes in a fair and biologically relevant way.”

The new tool emerged from the PhD project of Yara Sánchez-Corrales from the Grieneisen Lab on cell polarity: the ability of cells to distribute internal proteins in order to facilitate communication, movement or growth.

The Grieneisen lab uses the reference plant Arabidopsis and computer models to focus on the misshapen misfits called pavement cells that make up the surface of plant leaves.

While most plant cells are brick-like in shape, pavement cells resemble jigsaw puzzle pieces. They can transition from simple shapes to complex ones of 30-40 protrusions as their dynamics are visibly altered by internal protein activity.

“To describe some of these cell phenotypes we were using lab words such as skinny wiggly cells, chubby wavy cells or zig-zagging sausages,” says Dr Grieneisen. “This was subjective…we desperately needed to objectively capture in numbers the complexity of a biological shape.”

Being able to adequately quantify and compare the shapes of cells or organisms is of ultimate importance for biology, says Dr Grieneisen. This is because the shape of cells, organs and even entire organisms represent the outcome of internal processes – how genes and proteins interact and trigger biophysical manifestations.

Dr Sánchez-Corrales’ search for an adequate mathematical representation for cell shape led the group to discover there were inherent errors in quantifying shape properties through a traditional method named the Elliptic Fourier Analysis, named after Joseph Fourier the French mathematician and physicist.

This brought Dr Grieniesen’s lab into collaboration with Dr Stan Maree, an expert in pattern formation whose lab at the John Innes Centre specialises in multi-level modelling of morphogenesis.

From this collaboration the teams developed the LOCO-EFA technique which involves decomposing two-dimensional cell shapes – the shapes you can see under a microscope – into a series of ellipses.

These are further broken down and regrouped in a specific manner to uniquely describe shape properties which can be summed up to yield back the shape. The process resembles that of the geometric drawing toy Spirograph which uses circles to draw complex shapes.

Using mathematical procedures, these patterns are condensed into a series of numbers which add up to a characteristic “fingerprint.” This captures the distribution of protrusions or lobes that comprise the complex geometry of the cell, leaf or organ under scrutiny.

“We were inspired by a music analogy which guided the mathematics we performed,” explained Dr Grieniesen.

The tool will enable better phenotyping of cell shapes and also understanding of how cell shapes change in relation to others, and over time. But the appeal and applications are much wider says Dr Grieneisen.

“Our method will open the door to quantifying 2D shapes in all biology. But also, this is universal: it is a method available to any scientist in the world needing to quantify shape.”