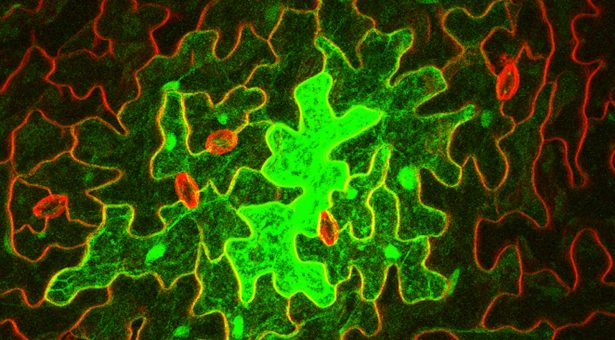 Self-isolation in the face of a marauding pathogen may save lives but it comes at the expense of life-sustaining essentials such as transport, communication and connectivity.

This leaves decision makers with a dreadful dilemma as they judge when it’s time to relax lockdown measures.

New research suggests plants must balance similar trade-offs as they respond to pathogens that could rip through their defence cell by cell.

Plant cells communicate with their neighbours by tunnel-like connections called plasmodesmata. This is one way that cells exchange information and resources.

Plasmodesmata are lined by the same membrane that surrounds the cell and they allow molecules to move from one cell into the surrounding cells.

When a cell perceives a threat like an invading fungus or bacteria, the plasmodesmata close over and the cells are temporarily isolated.

In this study researchers at the John Innes Centre used bioimaging approaches to investigate what proteins are involved in this process of cellular self-isolation.

The signalling cascade in plasmodesmata triggers the production of a polysaccharide called callose that forces the plasmodesmal tunnel to close over and for the cells to isolate themselves.

“This indicates that cells control their connectivity independently of other responses, although we don’t yet know why this is,” explains Dr Christine Faulkner.

“This is puzzling”, says Dr Faulkner, “but we also discovered that the mechanism of activation of this enzyme in the plasmodesmata is different to the mechanism used in the rest of the membrane. Thus, it seems that while both receptors use the same tool (the enzyme) to transmit a signal, they use it differently for different purposes.”

The requirement for specific signalling in the plasmodesmal part of the cell membrane suggests that the vital processes requiring cell-to-cell connectivity must be regulated independently of immune response.

The study concludes: “This raises questions whether there is a critical requirement for cells to balance connectivity and resource exchange with a protective mechanism imposed by isolation.”