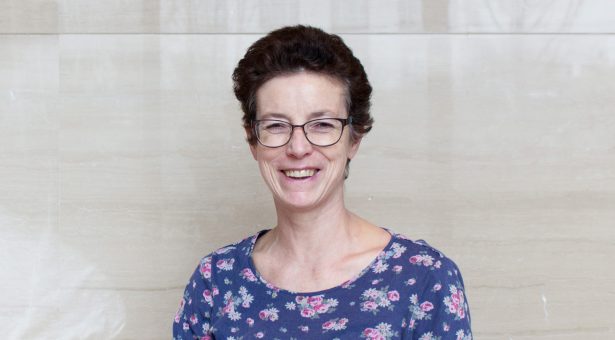 Professor Anne Osbourn has been elected as a Fellow of the Royal Society in honour of her exceptional contribution to science.

The honour reflects Professor Osbourn’s distinguished contributions to microbial and plant biology through pioneering work on plant pathogens and the role of gene clusters in natural product biosynthesis in plants.

“This is a great honour and very fulfilling,” she said. “I didn’t start out aiming to get recognition of this kind, I’ve just followed what I feel is important and interesting and done things I believe in. That’s sufficient for me in itself, but it’s gratifying that my work has attracted the recognition of the Royal Society.”

The Fellowship of the Royal Society is made up of the most eminent scientists, engineers and technologists working in the UK and Commonwealth. Past Fellows and Foreign Members have included Isaac Newton, Charles Darwin and Stephen Hawking.

Director of the John Innes Centre Professor Dale Sanders FRS said: “This is a fully deserved honour that recognises Anne’s pioneering work in plant natural product biosynthesis and her leadership in driving forward these insights towards impacts on a greater scale for the benefit of agriculture and medicine.”

Professor Osbourn is renowned for her studies on plant natural products. Her demonstration that specialised metabolites produced by plants as part of their normal growth can protect against disease has had major impact for the understanding of molecular plant-microbe interactions.

Her subsequent discovery that the genes that encode the pathways for the synthesis of natural product in plants are organised in clusters like beads on a string was a significant breakthrough that has opened unprecedented opportunities for genome mining for the discovery of new pathways to chemistry of agronomic and medicinal importance.

Professor Osbourn holds a number of leadership roles including directorships of OpenPlant, a £12m BBSRC/EPSRC-funded Synthetic Biology Research Centre led jointly by the University of Cambridge and the John Innes Centre, and the Norwich Research Park Industrial Biotechnology Alliance. She is also a trustee of the New Phytologist Trust and founder of the Science, Art and Writing (SAW) Trust, an international charity that promotes innovation in science communication.

Recent developments in her field amount to a time of unprecedented opportunity for Norwich Research Park, she says. “In the field of plant natural products this is a golden age for taking the dark matter of plant genomes and turning it into leads for new drugs and high value compounds for agriculture and industrial applications.

“But that is no good unless you can translate that into chemicals; and that is now possible because of the very rapid and powerful transient plant expression technology developed at the John Innes Centre which enables production of high purity, gram scale amounts of chemicals.”

“Norwich Research Park has been and will continue to be very important to me as a hub of interdisciplinary research.  This is a very exciting time for us to play our part in this golden age of discovery.”

The Royal Society is a self-governing Fellowship of many of the world’s most distinguished scientists. Professor Osbourn is one of 50 eminent scientists to become Fellows in 2019.

There are approximately 1,600 Fellows and Foreign Members, including around 80 Nobel Laureates. Each year up to 52 Fellows and up to 10 Foreign Members are elected from a group of around 700 candidates who are proposed by the existing Fellowship.

Dr Venki Ramakrishnan, President of the Royal Society said: “Over the course of the Royal Society’s vast history, it is our Fellowship that has remained a constant thread and the substance from which our purpose has been realised: to use science for the benefit of humanity.

This year’s newly elected Fellows and Foreign Members of the Royal Society embody this, being drawn from diverse fields of enquiry—epidemiology, geometry, climatology—at once disparate, but also aligned in their pursuit and contributions of knowledge about the world in which we live, and it is with great honour that I welcome them as Fellows of the Royal Society.”