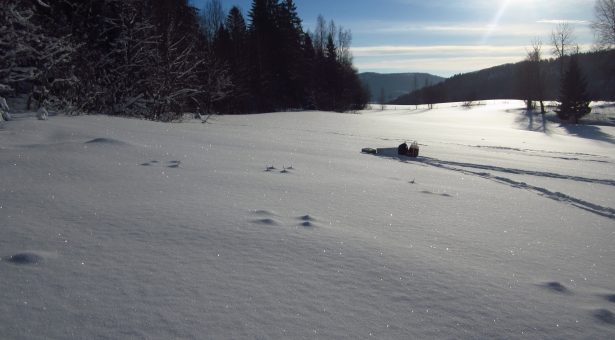 The gene FLC (FLOWERING LOCUS C) has long been studied as an important component in controlling when plants flower.

Now an international study led by the John Innes Centre and collaborators in Sweden has uncovered evidence on how this floral suppressor allows plants to adapt to different winter climates around the world.

The study, which unusually for this type of research into the model plant Arabidopsis thaliana was carried out in natural conditions, reveals that it is the levels of FLC expressed in the autumn not winter that affects how plants adapt to climates.

However, plants with different naturally occurring variants (haplotypes) of FLC are known to require different lengths of cold in the lab to switch them off. These variants have different geographical patterns, suggesting that this might be important for different winter climates.

To find out how FLC levels respond dynamically to different winter conditions, researchers measured these levels over winter in three different climates (in Norwich, South Sweden, and North Sweden), and over two different years.

By analysing FLC dynamics in the natural variants and mutants throughout the winter in the three field sites the study finds that it is the initial levels of FLC that are most important for the adaptation of the flowering response in Arabidopsis to different climates.

First author of the study Dr Jo Hepworth of the John Innes Centre explains: “We found that in plants with different haplotypes, it is the levels of FLC during autumn, not winter that differentiates the different haplotypes – all the natural variants, even those that need a long time in the cold in the lab, had finished vernalising by midwinter – but their response varied a lot in the autumn.”

The experiments also suggested a reason for this diversity in FLC expression.

“In one year our experiment in North Sweden suffered a heat-wave in early autumn,” says Dr Hepworth “Because it was warm, plants with lower FLC started to flower in autumn, even though when the heat-wave ended and the North Sweden winter set in the plants did not set seed. These plants were more likely to die over winter. The plants with higher FLC, that need longer cold in the lab, were less likely to flower early and more likely to survive winter. The FLC haplotype also affected the branches and seed number of the plants, separately from the effect on flowering. As a result of our experiments we better understand how plants regulate their FLC and flowering in response to real winter.”

The study increases our understanding of the molecular variable underpinning adaptation to different climates and has clarified the gene network that controls temperature-responses of FLC in the field.

Since the FLC levels in autumn were found to be important, the team are now focusing on how these are controlled. In addition, they noticed effects of FLC on reproductive success that they are further exploring.

Finally, the exploration of different FLC haplotypes can lead to insight on the regulation mechanisms, so these will continue to be used in the lab to understand the epigenetic control of FLC.

“Most of what we know about how FLC works is from laboratory experiments where temperatures are carefully controlled, “said Dr Rea Antoniou-Kourounioti, another author of the study from the John Innes Centre. “By analysing different Arabidopsis varieties adapted to different winter conditions in their natural surroundings we found that an important factor in adaptation to different climates is the starting level of the important flowering gene FLC.”