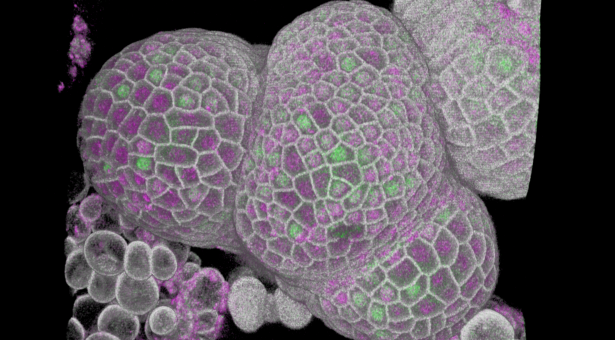 Ever since scientists discovered cells under the microscope more than 350 years ago, they have noted that each type of cell has a characteristic size.

From tiny bacteria to inches-long neurons, size matters for how cells work. The question of how these building blocks of life regulate their own size, however, has remained a mystery.

Now we have an explanation for this long-standing biological question. In a study focusing on the growing tip of plants, researchers show that cells use their DNA content as an internal gauge to assess and adjust their size.

Professor Robert Sablowski, a Group Leader at the John Innes Centre and corresponding author of the study said: “It has been suggested for a long time that DNA could be used as a scale for cell size, but it was unclear how cells could read the scale and use the information. The key is to use the DNA as a template to accumulate the right amount of a protein, which then needs to be diluted before the cell divides. It’s exciting to come across such a simple solution to a long-standing problem.”

Average cell size results from a balance between how much cells grow and how often they split in two. It has long been clear that cells grow to a certain size before they divide. But how can a cell know how much it has grown?

A good place to investigate this question is in the shoot meristem, the growing tip of the plant, which supplies new cells to make leaves, flowers and stems. Meristem cells constantly grow and divide. Their divisions are often not equal, producing cells of different sizes. Over time, these differences should build up, but the meristem cells stay within a narrow range of sizes over long periods.

In this study, which appears in Science, John Innes Centre researchers carefully followed the growth and division of meristem cells over time.

They found that although cells can start their life with variable sizes, by the time the cells are ready to replicate their DNA (a necessary step before cell division, as each new cell needs its own copy of the DNA), most of the initial variability in cell sizes has been corrected.

They then monitored a protein called KRP4, whose role is to delay the start of DNA replication, and found that, regardless of their initial size, cells were always born with the same amount of KRP4. This means that when a cell is born too small, it receives a higher concentration of KRP4, which delays its progression to DNA replication, allowing time for the cell to catch up to the same size of the other cells. Conversely, if a cell is born too big, KRP4 is diluted so it can move quickly onto the next stage without growing further. Over time this keeps meristem cells within a narrow size range.

But what ensures that cells start off with the same amount of KRP4? It turned out that when cells divide, KRP4 “takes a ride” on the DNA, which is given in identical copies to each newborn cell. In this way, the initial amount of KRP4 becomes proportional to the cell’s DNA content.

To make sure that KRP4 accumulates in the mother cell in proportion to the DNA content, any excess KRP4 not bound to the DNA is destroyed before cell division by another protein called FBL17. Mathematical models and using gene-edited mutants with varying quantities of these genetic components confirmed the mechanism.

Professor Robert Sablowski, explains this process, “One riddle we had to solve is how a cell can know how much it has grown when most of the components of a cell increase together in number and size so they cannot be used as a fixed ruler to measure size. One exception is DNA which exists in the cell in a discrete amount – its amount precisely doubles before cell division, but it does not vary with cell growth.”

Future experiments will seek to explain exactly how the regulatory protein KRP4 associates, then dissociates from chromosomes during cell division. The researchers also want to understand whether the mechanism is modulated in different cell types to produce different average sizes.

The findings may explain the relation between genome size and cell size – species with large genomes and, therefore a lot of DNA in their cells, tend to have larger cells. This is particularly important in crop plants, many of which have been selected to contain multiple copies of the genomes present in their wild ancestors, leading to larger cells and often larger fruits and seeds.

Components of the genetic mechanism that includes KRP4 are present in many organisms, and it has been suggested that these components are important to regulate cell size in human cells. Thus the mechanism uncovered in the study may also be relevant across biological Kingdoms, with implications for animal and human cell biology.

The image at the top of the page shows a shoot apical meristem (at the centre) with floral buds emerging on its flanks. Cells marked in green are about to enter DNA replication, while the magenta marker shows accumulation of KRP4, which is part of the mechanism that regulates cell size.