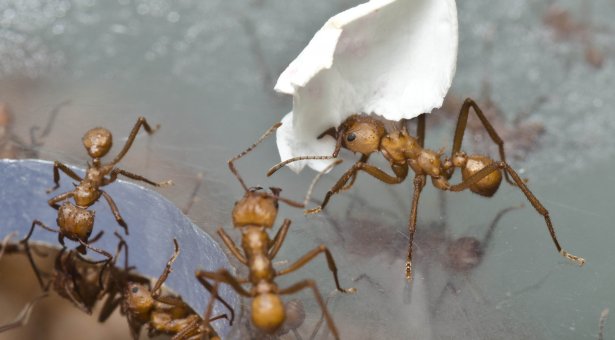 Researchers probing one of the mysteries of the insect world have identified a powerful chemical weapon used in the arms race between fungus-farming leafcutter ants and the parasites that plague them.

The existence of the behaviour-modifying chemical weapon emerged as researchers from the University of East Anglia and the John Innes Centre investigated the phenomenon of colony collapse – where the normally attentive and highly efficient ant farmers suddenly abandon their well-groomed gardens.

Leafcutter ants are the most highly evolved of attine fungus-growing ants and they are extremely common across Latin America. They are renowned for their gardening skills, which evolved around 60 million years ago. Their larvae only consume a specialised fungus, which the ants cultivate using a mulch of chewed leaves.

Leafcutter ant farms are infected by a specialized fungal parasite called Escovopsis, which has co-evolved to live off the fungal food supply. The ants grow biofilms of specialized bacteria on their bodies that produce antifungals to control Escovopsis infections. If colonies are stressed the parasite can overpower the entire fungus farm, resulting in colony collapse.

Professor Matt Hutchings from UEA’s School of Biological Sciences, said: “Leafcutter ants are superb farmers. They patrol their gardens, remove foreign fungi and use antibiotic-producing bacteria on their bodies to kill off parasites – effectively using them as weedkillers.

“But the ways in which Escovopsis succeeds in getting through their defences is not well understood.”

Working with partners at the Centre for Social Evolution in Denmark, and the Leibniz Institute for Natural Product Research and Infection Biology in Jena, Germany, the team took samples of the food fungus from leafcutter ant colonies collected in Panama and infected them with the parasite.

They were able to identify two families of molecules that were produced at high levels by the Escovopsis pathogen and tested them against the bio-control bacteria growing on the ant bodies.

The study, published in Nature Communications, revealed that the first molecule was able to kill the antibiotic-producing bacteria on the ants’ bodies, while the second also worked to modify the behaviour of the ants. Under its influence, the ants stopped grooming the fungus garden, fled, and eventually died if they continued to be exposed.

The mechanism is thought to be similar to that used by a totally different fungus that infects so-called ‘zombie ants’, which can be observed in Brazilian and Thai rain forests. Ants infected by this pathogen leave their colonies to die in areas where fungal spores can be spread most effectively.

Professor Barrie Wilkinson, a project leader at the John Innes Centre, said: “We think the Escovopsis pathogen is always present in or around the nests and kept at bay by the ants’ constant gardening and chemical defences.

“But when something unusual happens – a drought, or other environmental change perhaps – the parasite may gain a foothold and start increasing the levels of the chemical weapon compounds that cause behaviour changes and decrease the ants’ weeding efficiency in their gardens.

“From then on you have an escalating situation which leads to the appearance of dead ants, and the pathogen taking over, so the remaining ants eventually abandon the nest.”

Professor Wilkinson said the findings could help in understanding other harmful invasive ants, and potentially provide methods for controlling ant pests such as leafcutter ants without using insecticides.

There’s evidence too, that the ants are fighting back. Previous work by Professor Hutchings’ team has shown that the insects may be acquiring other antibiotic-producing bacteria from the soil to attack the parasite.

“Our results are consistent with an arms race driving the evolution of weapons of destruction and defence with each party seeking to innovate to keep the upper hand,” said Professor Hutchings. “It’s fascinating to see the expression of Escovopsis virulence unfold when things go wrong, and to realize that the ants are usually able to prevent such situations because their defence weapons against Escovopsis are also very sophisticated.”

Professor Koos Boomsma at the University of Copenhagen said: “There has been some discussion about whether evolutionary co-adaptation between the ants and Escovopsis is real, so it is gratifying to see these chemical arms race dynamics being documented.”

Professor Wilkinson added: “This work highlights the key role that natural products play in the pest-control dynamics of farming ant colonies and is invaluable in aiding our search for new antibiotics from this unique battlefield where, in the long run, no party can permanently win. This may help us in future studies to address the antimicrobial resistance (AMR) crisis in human medicine.”

“This study illustrates how important it is to gain insight into the diverse functions of natural products in nature,” said Christian Hertweck at Jena, “not only from an ecological perspective but also with a pharmaceutical application in mind.”

The research was funded by the Natural Environment Research Council and the Biotechnology and Biological Sciences Research Council, an ERC Advanced Grant, and by the German Research Foundation (DFG) Collaborative Research Centre ChemBioSys.