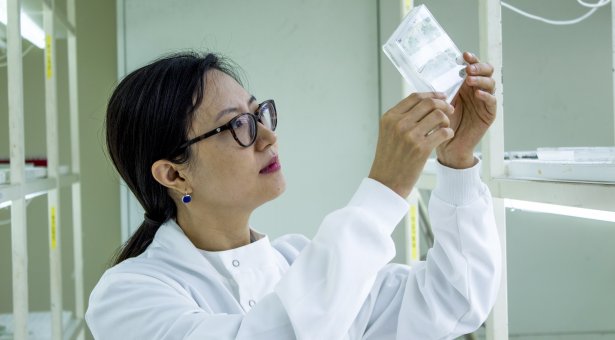 A new study has revealed an undiscovered reprogramming mechanism that allows plants to maintain fitness down the generations.

Germ cells are often referred to as “immortal” because they can pass their genetic material through the generations. They have been the subject of much scientific scrutiny.

This study aimed to solve a long-term debate on whether the germ cells in plants undergo an event of DNA methylation reprogramming at each reproductive cycle.

DNA methylation is a modification of DNA, which changes the activity of DNA without changing the genetic sequence.

It is a cornerstone of epigenetics – one of the fastest growing fields in life sciences with potential to deliver improvements in human and plant health.

DNA methylation reprogramming – known to exist in animals – occurs most dramatically in germ cells and regulates the reproductive success from generation to generation. Published today in Nature Genetics the John Innes Centre team worked in collaboration with colleagues from the University of Leicester to reveal for the first time the existence of DNA methylation changes in the germline of flowering plants.

They also reveal the mechanism by which this reprogramming happens – via a process known as de novo (anew) DNA methylation and its biological significance in maintaining reproductive success.

Dr Feng, project leader at the John Innes Centre, explains: “We knew this DNA methylation re-setting is extensive and important in animals where methylation is erased and re-established between generations.

The John Innes Centre team made the discovery while applying genetic analysis to male sexual lineage in the reference plant Arabidopsis thaliana.

The research funded by BBSRC is a key breakthrough in fundamental understanding of epigenetic regulation of plant development.

Dr Feng explained “Our research shows that developmentally regulated DNA methylation reprogramming can regulate plant development. Scientists have been searching for this for a long time. We show that genes can be regulated in specific cells via the de novo DNA methylation pathway, which is prevalent in many plant tissues, hence this mechanism may apply to many processes in plants.”

“Understanding how this naturally occurs during plant development is the first step in understanding how specific genes can be targeted by this epigenetic modification and hence regulated.