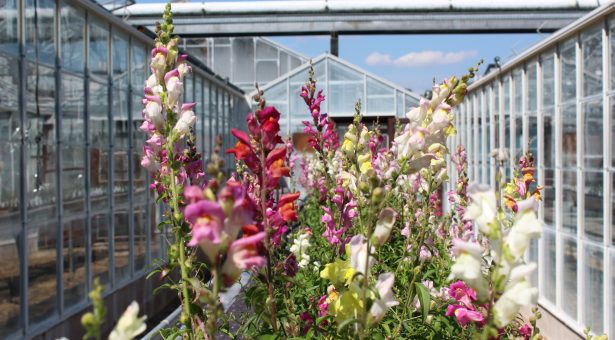 With buds bursting early, only for a mild winter to turn Arctic and wipe them out, we are witnessing how warm weather can trigger flowering, even out of season, and how important it is for plants to blossom at the right time of year.

BBSRC-funded scientists have unpicked why temperature has such a powerful affect on how plants flower.

In research published in the journal Nature, scientists from the John Innes Centre on the Norwich Research Park have identified the switch that accelerates flowering time in response to temperature.

With warm air, a control gene, called PIF4, activates the flowering pathway, but at lower temperatures the gene is unable to act.

“What is striking is that temperature alone is able to exert such specific and precise control on the activity of PIF4,” said Dr Phil Wigge.

Previously, it has been shown that PIF4 is vital for controlling other aspects of plant responses to warmth, for example growth, but this is the first time that the gene has been shown to be necessary for the activation of flowering by temperature.

Flowering is activated by a special molecule, called Florigen.

Florigen is activated by many signals, including the longer days of spring. Some plants rely more on temperature, others more on daylength to control key stages in their life cycle such as leaf emergence and flowering.  This is reflected in the old saying “Ash before Oak, you’re in for a soak; Oak before Ash, you’re in for a splash.”

While the pathway that activates florigen in response to daylength has been known for many years, how temperature activates Florigen has been a mystery until now.

“Our findings explain at the molecular level what we observe in our gardens as the warmer temperatures of spring arrive,” said Wigge. “It also explains why plants are flowering earlier as a result of climate change.”

Wigge and colleagues hope their research will eventually allow temperature-resilient crops to be developed. Crops plants often respond very strongly to warmer temperatures, reducing yields. By understanding at the molecular levels how plants sense temperature, the team hopes to breed crops which are more resilient to climate change.

“Knowing the key players in the temperature response pathways will be a valuable tool for safeguarding food security in an era of climate change,” said Wigge.

With all seven of the warmest years on record in the UK having occurred in the past decade, the race is on to help crops cope with the effects of higher temperatures caused by climate change.

The John Innes Centre is strategically funded by BBSRC.