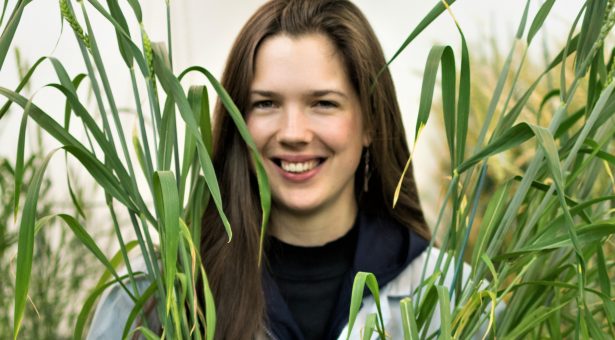 A John Innes Centre student has received international recognition for her outstanding contribution to wheat research.

The WIT award, established in 2010, provides professional development opportunities for women working in wheat during the early stages of their career.

It is named after Jeanie Borlaug Laube, a renowned scientific mentor and daughter of the Nobel Laureate and wheat pioneer Dr Norman Borlaug.

Anna, whose PhD is funded by the John Innes Foundation, is a second-year student supervised by Professor Cristobal Uauy and Professor Richard Morris. Her research is focused on the genetic networks in control of early spike development in wheat, trying to understand how developmental decisions are encoded in the crop’s notoriously vast genome.

“I was so excited to receive this award,” says Anna. “I’ve been pursuing a career in wheat science since high school and hope that I can continue for many more years. And at the moment I am exactly where I wanted to be for so many years: doing a PhD in wheat genetics and integrating into the network of global wheat research.

“Women are still underrepresented in wheat research, especially in senior positions. I am hoping to work towards changing this throughout my career.”

Opportunities that come with the WIT award include a visit to a training workshop at CIMMYT, Mexico, connecting with other WIT awardees and a Borlaug Global Rust Initiative meeting scheduled for later in the year.

Professor Uauy said: “This is an incredible achievement for Anna. We are delighted that she has been recognised as part of this impressive cohort of early career female researchers working on wheat. Anna has a deep-rooted motivation and passion to make an impact in the world through her research. She embodies the next generation of crop scientists, finding herself equally comfortable working in the field, the lab or doing complex bioinformatics on a cluster. She thoroughly deserves this recognition and we are so proud of what she has achieved and what is yet to come.”