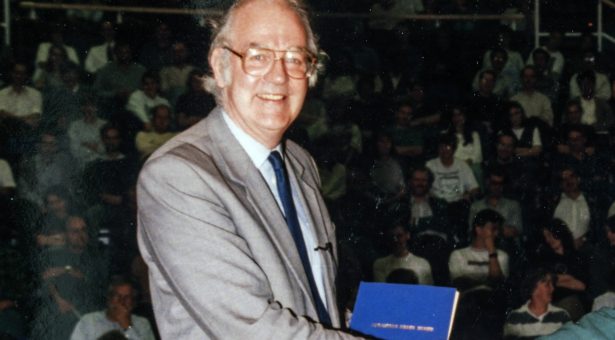 Professor Burke, who has died aged 89 on Friday March 15, was Vice Chancellor of the University of East Anglia (1987-1995), chairman of the John Innes Centre Governing Council (1987-1995), and a key figure in establishing the Norwich Research Park.

Professor Sanders paid tribute to Professor Burke, “We are saddened to note the passing of Professor Derek Burke who played such a key role in our history. Derek will be remembered as a strong advocate for the John Innes Centre as an international centre for plant and microbial research”.

As Vice Chancellor, Professor Burke was influential in building links between the UEA and Norwich’s research institutes. He arranged for the UEA to sponsor a competition to put a name to this emerging collaboration and as a result Norwich Research Park (NRP) was launched in 1993.

He chaired the Norwich Research Park Committee, and his conviction that “the value of the whole is greater than the sum of its parts” led to the considerable growth of the research park

For many years, Professor Burke was actively involved in advising the Government on the safe and responsible use of genetic modification for crop plants, including chairing advisory committees, as a Specialist Adviser to the House of Commons Select Committee on Science and Technology (1995-2001) and was active in debates on the topic.

Professor Sanders added: “After his retirement, Derek maintained a strong interest in the activities of the John Innes Centre, attending many of its public events and engaging with staff on developments in research.

“He was a strong advocate of building scientific links across the Norwich Research Park, thereby capitalising on the many synergies between the research institutes and the UEA.”

Professor Burke brought a range of expertise in support of the scientific programmes of the John Innes Centre, and generously shared these for the benefit of many in Norwich, at the UEA and on the Norwich Research Park.