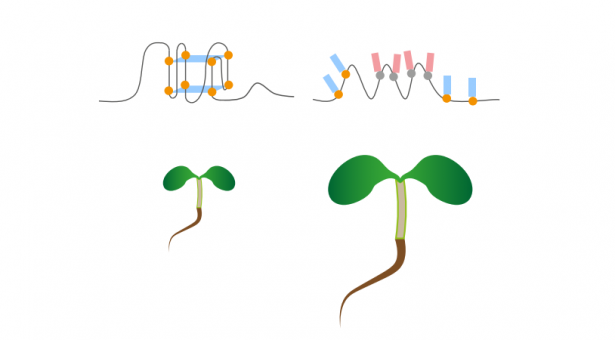 Researchers have resolved a longstanding biological debate by revealing the existence and function of complex RNA structures in plants.

RNA is often depicted in textbooks as linear and single stranded. But this macromolecule can fold into more complex shapes. RNA structures such as RNA G-quadruplexes, for example, have been seen in laboratory conditions forming in the presence of physiological concentration of potassium.

Because of this, it has been suggested that these highly stable secondary structures have important biological relevance and must exist in nature. But until now there has been no direct evidence of RNA G-quadruplex formation in living cells.

In a new study which appears in Genome Biology, John Innes Centre researchers investigated genetic regions rich in guanine one of the four main nucleobases found in DNA and RNA. These regions have in lab conditions shown potential to form RNA G-quadruplex motifs.

Subsequent genetic and biochemical analysis showed that RNA G-quadruplex folding can regulate the fundamental biological process of translation from RNA to proteins and has a function in modulating plant growth.

Corresponding author Dr Yiliang Ding says: “Our work over the past five years has tried to understand the structure of RNA inside the cell. For the first time we have answered the longstanding question about whether RNA G-quadruplex structures exist in living eukaryotic cells.

“Given that we have revealed the presence of a large number of RNA G-quadruplex structures in plants the next step is to unravel their individual regulatory roles in plant growth, development and stress response.”

The study: ‘RNA G-quadruplex structures exist and function in vivo in plants‘ appears in Genome Biology.

The image at the top of the page shows how Arabidopsis plants grow slower when RNA G-quadruplex is folded.