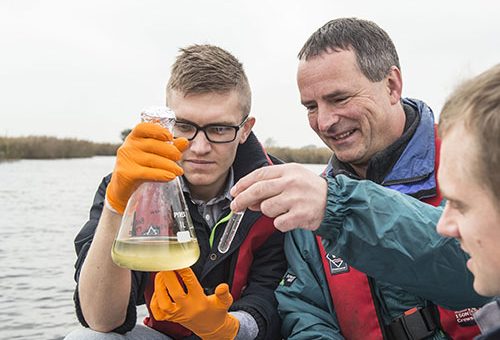 A simple test to check for toxic algae is set to make huge improvements to fish health and ecosystems benefiting fish farming and angling throughout the world.

Prymnesium, the Golden Alga, is responsible for hundreds of fish kills each year, affecting still water and brackish systems like the Broads and in fish farms in temperate regions around the world.

Unlike other algae, the Prymnesium bloom is not obviously visible and the first indication is often death of fish.

Early warning tests for Prymnesium presence are available but expensive and can take a long time to generate results.

But now, researchers at the John Innes Centre in Norwich are developing a cost-effective and simple dip-test, giving environmental managers more regular opportunities to establish early indication of the problem.

The research is taking place in the laboratory of Professor Rob Field, who is also the co-developer of a similar portable device for the detection of the influenza virus.

Professor Field says: “The effect of a Prymnesium bloom on the Broads can be devastating. We have some of the largest pike in the world on the Broads, which attract anglers from all over the world. Further afield, fish farms in Norway, the US, Israel, and Asia have also felt the effect of Prymnesium on their fish stocks.”

The project was formed after Professor Field’s colleague Dr Martin Rejzek, himself a keen angler, was told by fellow Broads fishermen about the catastrophic impact of the algae on the fish and resulting effect to the local economy.

Prymnesium can produce toxins very quickly, meaning water can turn toxic just days or even hours after a sample is taken but tests currently involve sending water samples to a laboratory with expensive specialist equipment or time-consuming counts of individual algal cells.

“The toxins cause the gills of fish and bi-valves to haemorrhage, allowing them to enter the blood stream with deadly effect,” explains Pike Angling Club liaison officer John Currie.

Dr Rejzek says: “As a natural product chemist, the toxin produced by Prymnesium drew my attention. It is a very complex substance, with unusual structural features. TheBroads are close to the John Innes Centre so we are ideally placed in terms of geography and in scientific expertise to carry out this important research.”

The research project is being carried out by PhD student Ben Wagstaff who is studying the interactions between the toxin and antibodies to develop the dipstick test, as well as a related strand of research to understand what causes the algae to produce toxins.

“The dipstick test will either detect the presence of cells or the presence of compounds produced by the cells,” he says. “It’s at an early stage but there are other examples where similar tests to detect whole cells using antibodies have worked before, which is encouraging for this project.”

Dr Dan Hoare, Environment and Design Supervisor for the Broads Authority, who is responsible for ecological restoration and habitat maintenance, says: “This test will be useful for the overall health of the Broads and all its wildlife and ecosystem.  Safeguarding the environment when carrying out practical projects in such a sensitive area is of prime importance. A simple test such as this would offer a rapid way of protecting fish health while ensuring that our routine maintenance work on the waterways can carry on safely.”

The PhD research is funded by the Biotechnology and Biological Sciences Research Council (BBSRC) with the Environment Agency and supported by local anglers through the Broads Angling Strategy Group and Pike Anglers Club of Great Britain.

Agency Fisheries Technical Specialist Steve Lane says: “Broads angling is worth nearly £100 million a year to the local economy, so it is vital that we take steps to better inform our understanding and management of Prymnesium.

“We are delighted to be able to use rod licence money to help support this important research, which will help us to take action to protect fish stocks in the future. I am especially pleased that work of potential world-wide significance to fisheries management is being spearheaded in an area so special to anglers.”