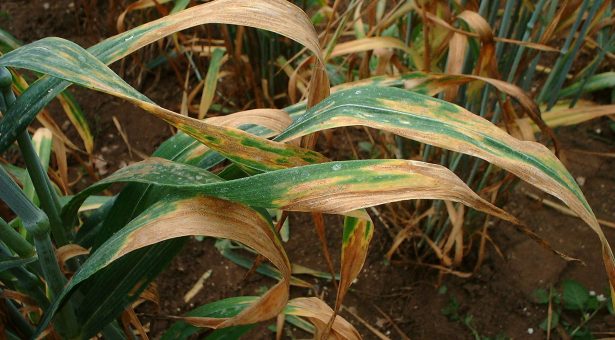 A new paper explains why plant breeders have found it difficult to produce wheat varieties which combine high yield and good resistance to Septoria, a disease in wheat which can cut yield losses by up to 50%.

It traces the problem back to decisions made nearly 60 years ago.

Septoria is the most destructive disease affecting wheat in the UK. As the fungus has become insensitive to most fungicides, demand for new Septoria resistant wheat varieties has risen sharply.

Septoria emerged as a serious threat to wheat in the 1970s. Since then, progress in breeding new varieties which combine high yield with resistance to Septoria has been slow.

Professor Brown said: “As we studied a historical set of varieties covering more than a century of wheat breeding, we discovered where the small region of the genome that increases both Septoria and yield came from. We traced it back to a variety called Heines Peko, which was used to breed for yield and rust resistance in the late 1950s.”

Heines Peko was crossed with Cappelle Desprez, the major wheat variety in Britain at the time. This cross was so influential that all modern wheats bred in Britain are descended from it. Professor Brown suggests that as wheat breeders selected ever more strongly for higher yield, susceptibility to Septoria hitch-hiked along with it.

“My group is now trying to find out if the connection between the two traits can be broken” he added.

Breeders appreciate that increased yield is the main driver of the market for new varieties. Professor Brown points out that although Septoria resistance has improved in recommended varieties over the last ten years, the lack of knowledge about the relationship between yield and susceptibility to Septoria has hindered progress.

“It’s surprising,” he adds, “that a decision made so long ago has had such a long-lasting effect.”

Ed Flatman, Head of European Wheat Breeding at Limagrain said: “Professor Brown and Dr Arraiano’s work was one of the very first applications of association genetics in wheat and it has helped us to understand the past history of breeding for resistance to Septoria.  We have now taken James’ results and built on them by identifying novel Septoria resistances in current, high yielding elite varieties.”

Dr Arraiano and Professor Brown’s research points to a way of rising to the challenge of combining yield and Septoria resistance. They found ten other genes scattered throughout the genome with smaller effects on Septoria. They also found that nearly half the variation in Septoria was controlled by genes with effects that were too small to identify individually. “We know the genes are there,” said Professor Brown, “but we don’t know where they are.”

Professor Brown is confident that breeders can make durable advances in Septoria resistance with this knowledge. “When breeders make crosses between diverse varieties, they produce new combinations of genes with small effects,” he explains. “Then if they run field trials at sites where Septoria is really rampant, they can spot the most resistant lines to commercialise and to use in the next generation of breeding.”

He believes this approach will enable breeders to improve Septoria resistance, while minimising undesirable side-effects, such as reductions in yield.

Professor Brown said: “With the pressures of restrictions on pesticide use added to Septoria becoming insensitive to most fungicides, farmers need varieties which combine yield and quality with resistance to Septoria and other diseases. Our breakthrough should accelerate progress in developing these new varieties.”

The research was published in the journal Molecular Plant Pathology and was supported by Department for Environment Food and Rural Affairs (DEFRA) through the Sustainable Arable LINK programme. The team also received support from AHDB and a consortium of plant breeding companies: Elsoms Seeds, Limagrain, Sejet, SW Seed and Syngenta, and by the Biotechnology and Biological Sciences Research Council (BBSRC).