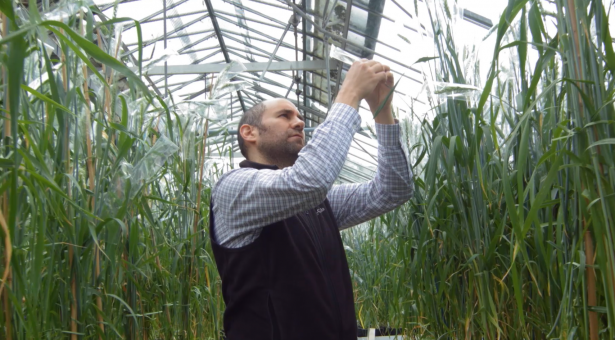 Dr Cristobal Uauy of the John Innes Centre has been awarded the ‘Bayer Early Excellence in Science Award’ 2011 for Biology for his work in the research area of wheat genetics.

The Bayer Foundation presents the Bayer Early Excellence in Science Award to talented young scientists in the early stages of their academic careers. The prizes, worth EUR 10,000 are awarded by an independent scientific committee of the Bayer Science & Education Foundation.

This new international prize was first presented in 2009 and is awarded annually in the three categories biology, chemistry and materials.

The selection is made on the basis of the originality and quality of candidates’ research and the significance of this work for the respective award category.

Cristobal’s award recognises the contributions he has already made to wheat genetic research early in his career, first at the University of California, Davis and now at the John Innes Centre.

During his PhD work he cloned the first Quantitative Trait Locus (QTL) in wheat, a gene for increased protein and micronutrient content in the grain. In his postdoctoral work, he helped identify a partial resistance gene against the wheat yellow rust pathogen, Puccinia striiformis.

“I am hugely honoured by the award from Bayer,” said Cristobal. “I’d like to extend this recognition to my inspirational colleagues at UC Davis and the John Innes Centre whom I’ve been fortunate to work with in trying to better understand the biology of such a relevant and complex crop such as wheat.”

In 2009 Cristobal joined the John Innes Centre, which is strategically funded by BBSRC, as a Project Leader, where he is developing new research into yield related traits and is engaged in the translation of his scientific results to applied crop breeding.

He leads our collaboration with the National Institute of Agricultural Botany (NIAB), which provides a pipeline to deliver the fundamental findings from John Innes Centre research to plant breeders and deliver practical benefits to farmers and consumers.

“Through his work with wheat – which is underpinned by state-of-the-art genomic technologies – Cristobal’s research is providing a foundation for three key areas of crop production: productivity, quality and pathogen resistance. The John Innes Centre takes pride in this award to Cristobal as we develop our crop science research, and salute Bayer for recognising the value of Cristobal’s research.”

“Research and science play a central role for the inventor company Bayer. I am delighted that these prizes give us the opportunity to support and motivate young scientists,” said Professor Wolfgang Plischke, member of the Board of Management of Bayer AG responsible for Innovation, Technology and Environment, and member of the Board of Directors of the Foundation.

“Bayer’s innovation strategy has long focused on intensive exchange with colleges and universities. The targeted funding of young scientists is just one element of our programme – cooperation and strategic partnerships are essential for successful industrial research,” continued Plischke.