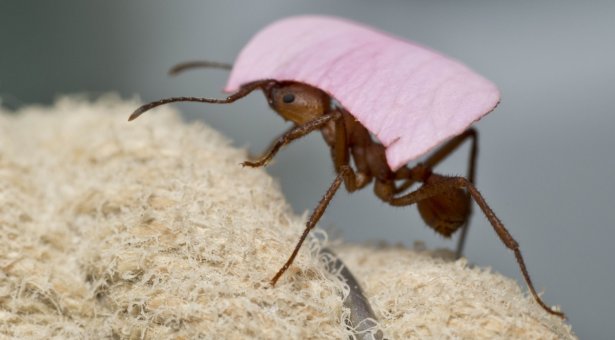 Antibiotics, the wonder drugs discovered by accident that have saved 200 million lives and counting, have been voted Britain’s greatest invention.

Recognition of the invention which followed on from the discovery of penicillin in 1928 by Sir Alexander Fleming came in a public vote on the BBC2 show Britain’s Greatest Invention.

TV presenter Angela Rippon, who survived tuberculosis after receiving life-saving antibiotics as a six-year-old, championed the drugs which were pitted against six other British-led innovations, the jet engine, steam engine, fridge, television, mobile phone and concrete.

The case for antibiotics was helped by a supporting role from John Innes Centre scientist Dr Ian Bedford who spoke about one of the more unusual sources of antibiotics – South American leafcutter ants – and ongoing work in Norwich to develop new bacteria fighting drugs.

Dr Bedford who works in the John Innes Centre entomology department is one of a team of scientists which include Prof Matt Hutchings from the University of East Anglia and fellow John Innes Centre scientist Prof Barry Wilkinson who are looking to apply the ants’ natural bacteria fighting capabilities towards finding effective drugs.

Leafcutter ants do not eat the leaf sections they carve from plants but transport the material underground where it decays and forms a garden of fungus. To protect this food source from unwanted microbes and parasites the ants cultivate antibiotic producing bacteria on their own bodies and smear it on invading bugs.

Dr Bedford welcomed the public recognition for antibiotics but warned that the show served as a timely reminder of the global challenge facing humanity due to AMR – antimicrobial resistance which is leading to multi-drug resistant bacteria such as MRSA.

“It’s great that the work of scientists who have produced life-saving antibiotics over the years has been recognised. But we are now facing a crisis due to increases in anti-microbial bacteria because antibiotics have been over used in farming, and over-prescribed in medicine. Their use is unregulated – there are many parts of the world where you can buy them over the counter.

“It’s a lesson. We now know that nature has the answer to a lot of the problems that the human race faces and if you abuse these things then you are going to have problems.”

Most antibiotics in clinical use are made up of a group of bacteria called actinomycetes that live in the soil and were isolated for medical use between 80 and 40 years ago. Other potential sources of antibiotics under investigation at the John Innes Centre insectary include stick insects and the Death’s Head Hawkmoth.

Antibiotics transformed medicine following the discovery by chance of Alexander Fleming as he was clearing out his laboratory and noticed that glass plates coated with the staphylocus bacteria that he’d forgotten to clean had rings of mould which were free of the bacteria. The mould was penicillin.

Ten years later Oxford scientist Howard Florey led a team that turned Fleming’s discovery into the “miracle cure” that was antibiotics working with American scientists to purify the mould, combine it with ether and alkalines and producing sufficient quantities and purity for widespread human use.

Antibiotics were first used in combat zones in World War II and led to the cure of major infectious diseases such as typhoid, cholera and tuberculosis as well as saving many lives from bacterial infections caused during surgery, childbirth and even from minor cuts and grazes.