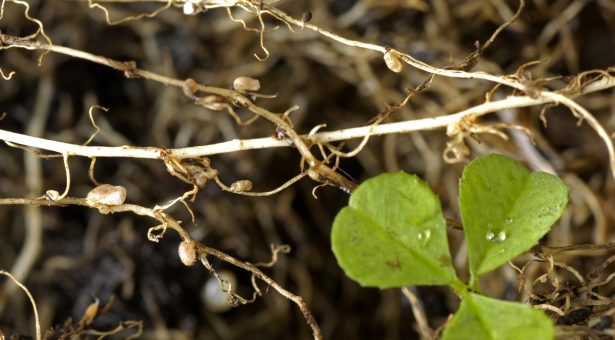 Professor Ray Dixon has been working with Chinese scientists to genetically engineer bacteria that could reduce farmers’ reliance on industrial nitrogen (N) fertilisers.

Plants need nitrogen to grow, and obtain this in the form of fixed N from the soil. However, in modern, intensive agricultural systems soil N is rapidly depleted, which necessitates the application of N fertilisers.

Although effective at increasing crop yields and cheap to produce, these are associated with a number of environmental drawbacks such as pollution caused by nitrates leaching from the soil, ammonia emission, and the release of nitrous oxide; a potent greenhouse gas.

Plants can get some of the nitrogen they need from nitrogen-fixing bacteria present in the soil, or in the case of specialised plants such as legumes, by forming symbiotic associations with bacteria that fix nitrogen in nodules on their roots.

Nitrogen-fixing bacteria possess one or more of three types of nitrogenase enzymes that convert atmospheric nitrogen into ammonium. The most common version contains the metal molybdenum, but alternative vanadium and iron-dependent nitrogenases also exist.

Recently published in the journal Proceedings of the National Academy of Sciences of the USA, the goal of this research was to engineer an artificial iron-dependent nitrogen-fixing system in Escherichia coli, a bacterium that does not normally fix nitrogen from the air.

Professor Dixon said: “Nitrogenase enzymes are complex structures encoded by several different genes, and the activity of these enzymes are supported by other genes scattered about the genome. It is particularly difficult to determine how many genes are required for nitrogen fixation in an organism that contains three different types of the enzyme.”

“Instead, we used E. coli as a chassis to genetically engineer a functional, iron-dependent nitrogenase. We discovered that only a few genes are required to make this enzyme, which will hopefully make the system easier to engineer in other bacteria and even perhaps even in crops, since plant mitochondria and chloroplasts are deficient in molybdenum.”

This research marks a first step towards engineering new N-fixing bacteria that could potentially be used to create synthetic symbioses between microbes and plants. This could provide a biologically sustainable source of N for crops, particularly in areas of the world where soils are deficient in molybdenum.

It also paves the way for further research to engineer plants that, one day, might be able to fix their own nitrogen directly from the atmosphere.