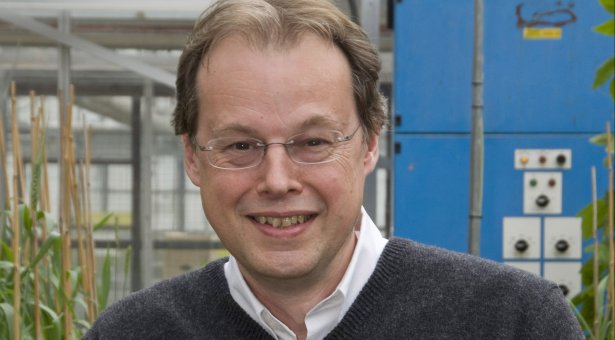 Professor Graham Moore (pictured) and University of Bristol’s Professor Keith Edwards have been jointly awarded the 2018 Rank Prize in Nutrition (Human and Animal Nutrition and Crop Husbandry) for their exceptional contribution to wheat research.

The prize, awarded every other year, recognises ‘their pioneering research which has enabled plant breeders to exploit cereal genomics to develop improved wheat cultivars’.

Professor Moore has had a long and distinguished career in wheat research, and this prize recognises three of his major breakthroughs: the pioneering concept of cereal ‘synteny’; the use of this concept to characterise the Ph1 locus; and the proposal and subsequent coordination of the WISP wheat pre-breeding programme.

Professor Moore, who co-ordinates the Designing Future Wheat cross-Institute Strategic Programme, said “Keith and I are really pleased that our contributions to wheat science and breeding have been recognised. We successfully developed a wheat pre-breeding programme in collaboration with private sector wheat breeders, ensuring that our research has direct impact”.

Professor Dale Sanders, Director of the John Innes Institute said: “The award of this prestigious prize to Graham Moore gives wonderful recognition to the huge impact that Graham’s work has had on cereal research. This has emerged over the years at all levels, from his pioneering blue skies research through to findings that can be translated to crop improvement.”

Rice as a model for cereal and grass genomics

The pioneering research involved initially dividing up the rice genome into building blocks, and using this as a reference to divide up many other cereal species, including wheat, in the same manner. Thus, despite the lack of a wheat genome sequence, the genome sequence of rice could be used to reveal the gene content of any chromosome region in wheat. The result was a huge boost in interaction between scientists working on different cereal species.

Characterisation of the Ph1 locus

Domesticated bread wheat, Triticum aestivum, is an example of a hexaploid species, with three pairs of each chromosome, compared to, for example, humans with only one pair of each. In wheat, each chromosome pair comes from a distinct ancestor, carrying distinct characteristics. During sex cell division, it is crucial that chromosomes from different ancestors do not associate, as this would cause genome instability, with eventual infertility of the offspring.

Professor Moore identified and fully characterised the Ph1 locus, which is responsible for ensuring chromosomes only associate with other chromosomes from the same ancestor. Chromosomes of species related to wheat carry important traits which would be useful if transferred to wheat. This requires association of the wheat and relative chromosomes. Full understanding of how the Ph1 locus operates would greatly benefit wheat breeding, as temporarily turning off Ph1 allows more efficient association of wheat and relative chromosomes, thereby providing a far more diverse foundation for crop breeding.

Development and coordination of the WISP wheat pre-breeding programme

Less than 10% of the diversity in relatives of wheat available to wheat breeders has been exploited. Professor Moore proposed the development of a wheat pre-breeding programme, brought together the public and private sectors and coordinated the programme himself, despite receiving no personal funding. Professor Edwards was a key partner in the programme, developing a highly successful genomics platform for identifying and following chromosome segments during breeding.

The Rank Prize Funds is a charitable organisation which seeks to recognise excellence in specific fields of research and reward innovators for their dedication and outstanding contribution.