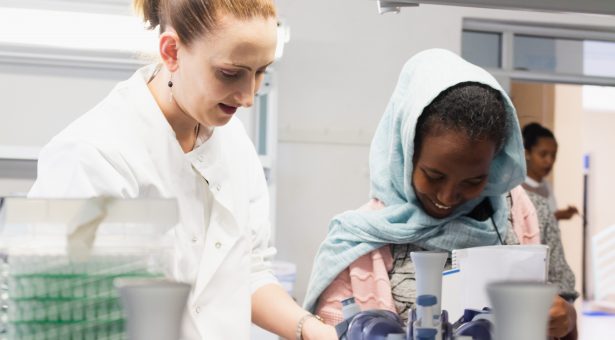 Professor Diane Saunders is today announced as the recipient of the 2022 Royal Society Rosalind Franklin Award and Lecture. The award recognises Professor Saunders’ long-term achievements in the field of plant pathology and will support activities to improve representation of women in STEM roles. This award will fund the development of the Rosalind Franklin Women in Wheat Champions programme that will promote the career development of women particularly in wheat research.

“I am honoured and delighted to receive the Rosalind Franklin Award”, said Professor Saunders, “The field of wheat research is a fascinating area to work in, but we need more women in senior roles. This funding will support the rising wave of incredible early career female researchers in this field and beyond. Whilst also providing them with the skills to guide others in their career development”.

Professor Dale Sanders FRS, Director of the John Innes Centre said, “Being named as the 2022 recipient of The Rosalind Franklin Award is a tremendous achievement for Diane and for the John Innes Centre, where we strive for research excellence and inclusivity.  This newly funded programme that accompanies the award will help us in that mission”.

Professor Graham Moore, Director-designate of the John Innes Centre said, “Diane is an exceptional researcher and inspiring role model. I am delighted that the Royal Society recognise her many achievements and this grant will enable others to follow in her footsteps”.

Professor Saunders led the development of the Women in Wheat programme that began in 2019 to improve representation of women in wheat research, particularly in academia where there is a severe underrepresentation at the independent researcher career stage. The award from the Royal Society will markedly expand this by establishing the “Rosalind Franklin Women in Wheat Champions” programme.

The Rosalind Franklin Women in Wheat Champions programme will incorporate a “cascading” mentoring approach starting with faculty and ending with university students and include professional leadership training, to address this critical need for equal diversity across all career stages.

Whilst receiving one-to-one mentoring from research leaders, women in Post-Doctoral roles and PhD positions, will also in turn mentor female undergraduates. This will enhance the professional development and preparedness of our postgraduate mentees for independence, whilst also strengthening the social and professional development of female BSc students, empowering them with the confidence and tools for successful research careers. This targeted approach aims to support career progression into research leader and senior management roles, building on the exceptionally successful foundations of the current women in wheat programme.

In addition to mentoring relationships, women from senior roles across academia and industry will meet with the cohort to share experiences and advice for career development. As part of the programme, the cohort will also co-produce a symposium that provides a chance to share research interests and enhance the visibility of the early career researchers.

Although the Rosalind Franklin Women in Wheat Champions focus is specifically on wheat, it is hoped that the combination of training, networking and cascading mentoring could provide a model of how to support women in STEM. Indeed, a key aim of the programme is to develop it into a portable package that can then be easily adapted and applied in other areas of need.

As part of the award, Professor Saunders will give a livestreamed lecture to share her research and experiences over her career. The symposium will be publicly accessible and will take place in the autumn.

The Rosalind Franklin award recognises the long-term achievements of Professor Diane Saunders in her field. Diane has researched crop diseases since her PhD at Exeter University, studying three of the most important plant diseases in the world: rice blast, potato blight and wheat rusts. Following a postdoctoral fellowship at The Sainsbury Laboratory, Diane started her own research group in 2014, where she studies emergent plant pathogens that pose a significant threat to agriculture. Based at the John Innes Centre, she is also an Honorary Professor at the University of East Anglia.

Over her career, Diane has become particularly well known for her breadth of expertise in plant pathology, making numerous contributions to the field. This includes new discoveries in how wheat rust pathogens evolve and spread, identifying the first UK occurrence of wheat stem rust in over 60 years and contributing to several other disease emergencies such as the response to Ash dieback in the UK and wheat blast in South East Asia.

In 2019, Professor Saunders was awarded the BBSRC Innovator of the Year award for international impact. This award was made in recognition of the pioneering techniques her lab has created to integrate genomic advances into pathogen surveillance programmes. This includes the revolutionary “field pathogenomics” and more recently “MARPLE Diagnostics” techniques, which has accelerated field identification of fungal wheat rust strains to within 2 days, compared to previously expected times of many, many months. This new technology is now being used to inform wheat rust surveillance systems in Europe, South East Asia, East Africa and beyond.

The Rosalind Franklin Award is organised by the Royal Society and has been in operation since 2003. It is named in honour of Dr Rosalind Franklin who used X-ray crystallography to provide evidence for the double helix model of DNA. Despite her central role in this discovery, Dr Franklin was not awarded a Nobel Prize. Her work was also instrumental in understanding the structures of many viruses, including plant viruses such as her pioneering role in resolving the structure of the Tobacco mosaic virus. Dr Franklin’s career was cut short when she died of ovarian cancer at the age of 37.

The Rosalind Franklin Award is supported by the Department for Business, Energy and Industrial Strategy (BEIS). Recent winners of the award have come from planetary sciences, mathematics and nanomaterial disciplines.

The Rosalind Franklin Women in Wheat Champions programme is a collaboration between the John Innes Centre, The Sainsbury Laboratory and the University of East Anglia.

More announcements on the programme, will be released on the John Innes Centre website and social media accounts in the autumn. The date of Professor Saunders’ lecture and how to attend will be announced later in the year.

The John Innes Centre is a plant and microbial research centre based in Norwich, UK. It was the first independent research institution to be awarded Athena Swan Gold award, recognising significant and sustained promotion of gender equality within and beyond the institution.