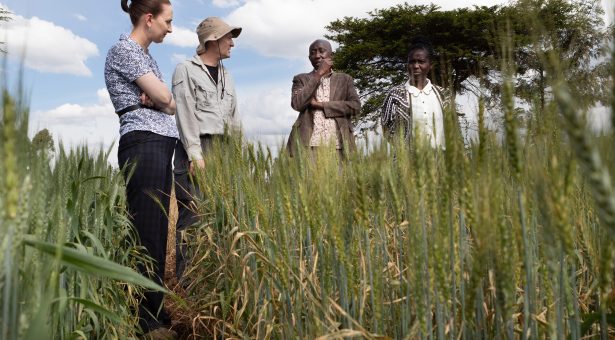 A new MARPLE Diagnostics hub has been established at the Kenya Agricultural and Livestock Research Organisation (KALRO) in Njoro as part of a strategic expansion of the platform to improve global rust surveillance.

Researchers from the John Innes Centre and International Maize and Wheat Improvement Center (CIMMYT) launched the new Njoro hub by training 17 plant pathologists in the MARPLE pipeline. Participants comprised researchers from both KALRO and the PlantVillage Dream Team.

This new capability enables local researchers to identify yellow rust strains within two days of collecting samples, a process that previously took 3-12 months and was reliant on sending samples overseas. For the Njoro research station the training also represented a landmark moment, with the first ever gene sequencing taking place on site.

The new platform will allow Kenyan rust pathologists to monitor and respond to emerging rust threats more rapidly. The July training provided the KALRO and PlantVillage researchers with the ability to identify yellow rust strains as part of a new strategic Kenyan MARPLE hub.

The Njoro hub marks the third of its kind globally, following the opening of the initial Ethiopian hub and a South Asian hub in Nepal during early 2022. KALRO Njoro researchers will incorporate the platform into their ongoing rust monitoring while the Dream Team will connect the platform with their rust surveys across Kenyan farming areas.

“This new diagnostic technique, is a game-changer for us and our country – because we can use it to encourage timely control measures for new races out there”, said KALRO Njoro researcher Dr. Zennah Kosgey, “

Rusts are a type of fungal disease that can infect many crops and spread large distances on the wind. Farmers protect their wheat crops against infection through effective disease management, including planting rust resistant varieties and applying appropriate fungicides. Over time, however, new rust strains diversify that can overcome resistant varieties, or the fungus itself might become resistant to local fungicide applications. Hence, even with these measures, today wheat yellow rust alone can reduce grain yields by 30 – 80% and is responsible for annual losses of around 5.47 million tonnes. The key to protecting farmers crops against rust damage, is to quickly identify new strains and use this information to plan control strategies before the infection spreads.

“New rust strains are constantly emerging and spreading across huge geographic space”, said John Innes Centre Group Leader Diane Saunders, “Our best chance of tackling this threat is to know exactly which strains are present in a farmer’s field so we can action the most appropriate control measures. MARPLE Diagnostics can do just this and accelerate KALRO’s current surveillance platforms”.

Kenya has established rust surveillance systems but until now, has lacked the ability to identify individual strains through genetic analysis. Previously this step relied on sending samples to technology hubs outside  Kenya and meant that rust researchers who thought they had found a new rust threat would have to wait 3 – 12 months to confirm this suspicion. By the time the results would return, the season has passed, the crops damaged and the infection has spread further.

Now however, the MARPLE pipeline means that Kenyan researchers can carry out sequencing on location and identify rust strains in as little as two days. The new mobile lab is designed to deliver these results on unstable power supply and without reliance on internet access – both features that make MARPLE accessible for field labs.

Faster identification also accelerates rust research by better informing which rust samples are used in pathology tests and crop screening nurseries. These tests are used to assess if the new rust strain has overcome resistances in other wheat varieties. In Njoro, this means that researchers can stay vigilant to spot known strains which Kenyan wheat varieties have little resistance to. But the Njoro site also has an international role in global rust research. On a larger scale, rapid identification can improve tracking of rust strain flow across continents.

“Tracking the strains of rust in Kenya is incredibly important for Kenya itself but also for the wider region,” said CIMMYT Rust Pathologist Dave Hodson, “new dangerous rust races are arriving in East Africa and these are causing problems. Having rapid monitoring technology here in Kenya is important to get advanced early warning of new threats coming into the region so we can give timely, actionable advice to the Kenyan farmers how they can protect their crops.”

East Africa is a key location for both new rust strains entering the continent and new strains diversifying and moving to the Middle East. Protecting farmers harvests relies on understanding this flow of races across continents. Kenya’s role in rust movement makes Njoro of international importance for monitoring wheat rust resistance and so it is of global interest to equip the Njoro-based researchers with the most advanced identification tools. The new MARPLE pipeline means that these individuals can continue to champion this role, but now in a way that is much faster, and gives them full control.

Since the workshop, the Njoro researchers have run the full pipeline and identified local yellow rust races against records from the Global Rust Reference Center. It is hoped that the Njoro platform will soon be able to include race analysis for the other major rust pressure in Kenya, stem rust.

MARPLE Diagnostics was developed by the Saunders Lab at the John Innes Centre in collaboration with CIMMYT. The project is currently funded by USAID through PlantVillage and BBSRC.