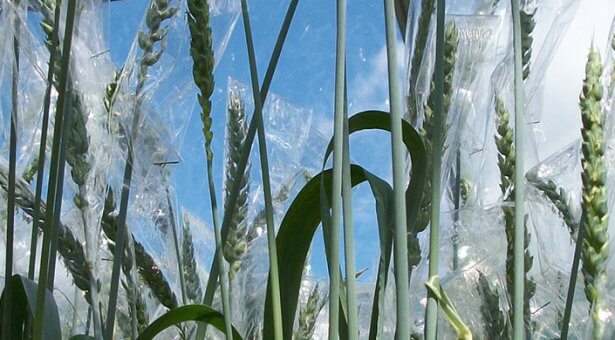 New and more virulent crop diseases are predicted to emerge as a result of climate change.

Scientists from the John Innes Centre and The Sainsbury Laboratory on Norwich Research Park are at the front line of fundamental research to understand the impact of temperature on pathogens, plants and how they interact. They will mine genetic diversity in crop relatives for new sources of disease resistance.

TSL scientists are enlisting a wild grass collected from coastal plains in Israel to protect wheat harvests from a disease that is already devastating crops from Uganda to Iran.

The wispy, insignificant-looking grass Aegilops sharonensis, or Sharon goatgrass, grows on coastal plains in Israel and South Lebanon that are undergoing increasing development. Many populations of the grass are on the edge of extinction.

Scientists are growing it from seed in glasshouses at The Sainsbury Laboratory so they can identify the genes that protect it from Ug99, a stem rust fungus that could infect 80-90% of wheat varieties worldwide. They have just received an additional half a million pounds of funding from BBSRC to identify and isolate the genes responsible for disease resistance.

The disease can spread rapidly over large distances by wind or by accidental human transmission. Stem rust pathogens can also evolve quickly and seven additional variants of Ug99 have been identified. The onward spread is highly likely.

“The immediate fear in terms of food security is that Ug99 will reach the Northern Punjab in Pakistan where nearly a fifth of the world’s wheat is grown,” said Dr Wulff.

Stem rust traditionally thrives in warmer climates and is only an occasional visitor in the UK, but Ug99 is more aggressive at lower temperatures compared to other strains. A longer term fear is that it could become established in more temperate regions of Europe.

“Rising temperatures and increasing drought are the most obvious threats to agriculture posed by climate change, but the greatest impact of climate change on yields could actually be the emergence of new pests and diseases,” said Dr Matthew Reynolds from CIMMYT, the International Maize and Wheat Improvement Centre.

Ug99, first identified in Uganda in 1999, is of particular concern because it has broken a key resistance gene in commercial wheat, Sr31, that has protected crops worldwide for three decades. It is also virulent against most other resistance genes in wheat and related species.

The leaves and stems of a healthy crop, just weeks away from harvest, can become infected with red blister-like pustules and turn into a tangle of black stems and shrivelled grains. Yield losses of 70 per cent or more are possible, with the biggest losses in small scale subsistence farming.

“Over the next three years we aim to identify the genes that make Sharon goatgrass able to stand up to Ug99,” said Dr Brande Wulff.

“The ultimate step, four or five years from now, is to isolate these genes, take them out with the molecular tweezers and put them into locally-adapted high-yielding bread wheat.”

One of the defining differences of this research is that the scientists plan to clone not just one new resistance gene, but several, and put them together in one package. As a backup, they will continue to clone more genes. As they learn more about the pathogen they will be able to mix and match genes in combinations that are even more likely to provide durable resistance.

“We hope to create a formidable obstacle to the pathogen,” said Dr Wulff.

The research is funded by The Gatsby Charitable Foundation, The Two Blades Foundation, The Biotechnology and Biological Sciences Research Council (BBSRC) and the Capacity and Capability Challenge (CCC) fund from The Genome Analysis Centre (TGAC).

Researchers at the John Innes Centre, also on the Norwich Research Park, are investigating other emerging pests and diseases that could be exacerbated by climate change. Dr Saskia Hogenhout is studying small bacteria called phytoplasmas that are transmitted by insects to infect crops including potato, oilseed rape, carrots and lettuce.

Dr Vinod Kumar is studying the fundamental mechanisms that govern interactions between plants, pathogens and climate, focusing on variations in temperature. By improving our fundamental understanding, his research team hope to be able to develop climate-resilient resistance to crop diseases such as blackleg disease of brassicas.