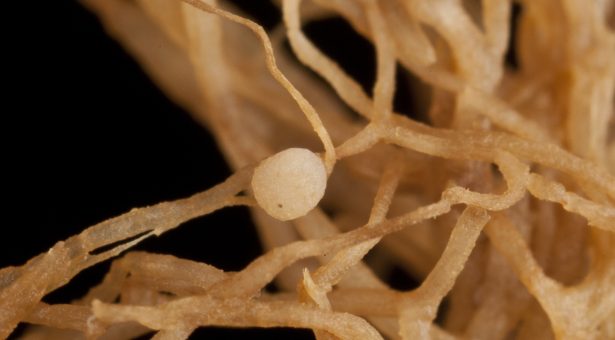 Research published in the journal Nature reveals how scientists at the John Innes Centre and Washington State University, USA have managed to trigger nodulation in legumes, a key element of the nitrogen fixing process, without the bacteria normally necessary.

This is an important step towards transferring nodulation, and possibly nitrogen fixation, to non-legume crops which could reduce the need for inorganic fertilisers.

The researchers, funded by the Biotechnology and Biological Sciences Research Council (BBSRC), the Royal Society and the US National Science Foundation, have used a key gene that legumes require to establish the interaction with the nitrogen-fixing bacteria to trigger the growth of root nodules, even in the absence of the bacteria.

The fixation of nitrogen by some plants is critical to maintaining the health of soil as it converts the inert atmospheric form of nitrogen into compounds usable by plants.

Legumes, as used in this study, are an important group of plants as they have the ability to fix nitrogen – which they owe to a symbiotic relationship with nitrogen-fixing bacteria in root nodules. Legumes are often used as a rotation crop to naturally enhance the nitrogen content of soils.

Scientists have been working for a number of years to understand the symbiosis between legumes and rhizobial bacteria, with the hope that one day they can transfer this trait to crop plants, the majority of which cannot fix nitrogen themselves.

Intensive crop agriculture depends heavily on inorganic fertilisers that are often used to provide nutrients particularly nitrogen that are critical for plant growth.

The production of nitrogen fertilisers requires a large amount of energy and is estimated to constitute approximately 50 per cent of the fossil fuel usage of the modern agricultural process. Inorganic fertilisers also cause environmental problems associated with leeching into our water systems.

Dr Giles Oldroyd is the research leader at the John Innes Centre. He said: “We now have a good understanding of the processes required to activate nodule development. The nodule is an essential component of this nitrogen fixing interaction as it provides the conditions required for the bacteria. Nodules are normally only formed when the plant perceives the presence of the bacteria. The fact that we can induce the formation of nodules in the plant in the absence of the bacteria is an important first step in transferring this process to non-legumes. If this could be achieved we could dramatically reduce the need for inorganic nitrogen fertilisers, in turn reducing environmental pollution and energy use. However, we still have a lot of work before we can generate nodulation in non-legumes.”

Professor Julia Goodfellow, Chief Executive of BBSRC, commented: “BBSRC is the principal funder of fundamental plant research in the UK and commits millions of pounds a year to furthering our understanding of basic plant biology. Such fundamental research may seem disconnected from the every day world for many people but this project shows how potentially important such science is. The findings have the potential to lead to a practical application with substantial economic impact for the UK.”