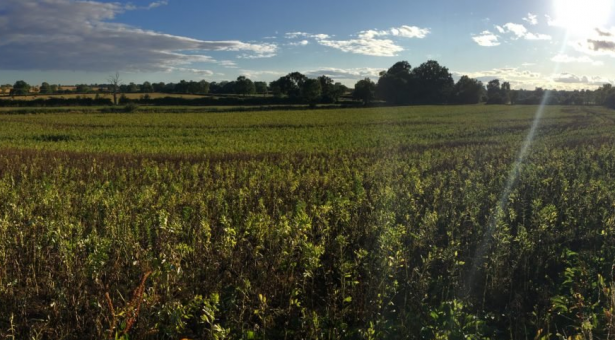 A project to combat a newly emerging disease of barley is being launched, which will pull together the efforts of plant scientists, breeders and industry to prevent this disease establishing and help UK farmers produce barley cost-effectively without additional impact on the environment.

Finding ways to combat cereal diseases is crucial to ensure food security going into the future.

Ramularia leaf spot is a fungal disease of barley that has come to prominence in the last ten years. It is a significant problem in Ireland and Scotland, and is spreading into England, with Norfolk seeing a major outbreak last year.  The disease has already taken hold in northern Europe, especially in Germany and Scandinavia, where it causes substantial yield losses.

The rapid increase in importance of this disease means ways of controlling the fungus and breeding resistant varieties are still in their infancy.

In order to ensure the security of our food supply, cost-effective and environmentally-benign control methods need to be developed.  Little scientific study has been carried out on the fungus to date, so CORACLE provides a timely opportunity to tackle the problem while it is still at a manageable level.

CORACLE will improve the control of ramularia in the field, helping barley producers to combat the disease and reduce fungicide applications.  The scientists and companies working on the project will take an integrated approach.

In the short term, CORACLE aims to reduce the severity of ramularia outbreaks in the field and to stop the disease spreading in contaminated barley grain.

In the longer term, the research will help plant breeders to produce barley varieties that are more resistant to ramularia.

CORACLE is coordinated by Professor James Brown.  He said, “We still don’t know very much about this disease. Over the next four years, we’ll be improving our scientific knowledge of Ramularia and helping the farming industry to combat it.”

Stuart Knight of The Arable Group, one of the CORACLE partners, outlined the threat this disease poses to UK agronomy: “Ramularia is now a UK-wide problem that can affect winter as well as spring barley. Control strategies targeted at other common pathogens may not be fully effective at minimising the impact of this disease.”

The Scottish Agricultural College (SAC) and the Scottish Crop Research Institute (SCRI) are research partners in the project.  Dr Simon Oxley, senior researcher at SAC, said “The launch of this project will build upon our existing knowledge about the epidemiology of the disease and resistance to fungicides. By working with plant breeders and industry in this new project, we can look to the future to develop varieties with resistance to this important disease.”

The project consortium includes plant breeders and agro-chemical companies.  Dr Peter Werner, a breeder at KWS UK Ltd, said: “The control of diseases and pests is a very high priority to both the breeding and agro-chemical industries but to date only limited progress has been made towards Ramularia control.  We need the improved understanding of the pathology of the disease that this project offers and expect to be able to use this to aid the development of new varieties and products.”

The CORACLE project (Control of Ramularia Leaf Spot in a Changing Environment) is being funded by BBSRC, the Scottish Government’s Directorate for Rural and Environment Research and Analysis, and the HGCA.