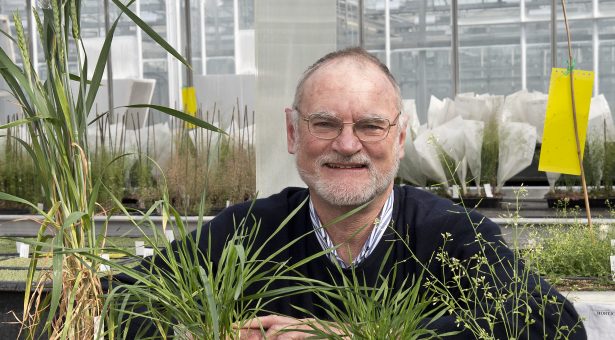 He has since pioneered insights taken up by the crop biotech industry and with his current work aims to increase food production.

Did an outdoorsy upbringing in New Zealand help spark your interest in science?

I was brought up on a remote sheep farm in the King Country of the North Island of New Zealand. Until WW1 this area was essentially virgin podocarp forest, and large tracts remained while I was a child in the 50’s.

I was very interested in the many species found in this unique and diverse forest, especially ferns, and I collected these.

My mother is an exceptionally gifted gardener and nurtured my interests. In particular she bought me my first microscope and I became hooked on observed small organisms and cells.

I was equally interested in animals. I was fascinated at the weekly sheep slaughter, where my father showed me the intricacies of the ruminant gut. So I had a very early interest in biology; as my elder brother was destined to take over the farm, I also had to find something different.

What drew you to biochemistry for your undergraduate degree and PhD?

I failed medical school entrance exams due to slack school performance, so I studied natural sciences at Auckland University.

Looking back this was a lucky break as I would have been a lousy doctor.

I was bored by taxonomy and comparative anatomy, but I loved chemistry and microbiology. So I had great enthusiasm for biochemistry given my interest in chemistry. My lack of strong maths also precluded advancing in chemistry.

What was your first introduction to genetics?

For me the most formative paper was Jacob and Monod’s analysis of the lac operon, and lectures on phage and bacterial genetics. This explained how Brenner and Crick worked out the coding problem and postulated the messenger and adapter hypothesis. I think these were among the most compelling and insightful experiments conducted in biology.

When I was a post-grad at Cambridge I attended a talk by Fred Sanger in 1976 on the sequence of phiX174, exposing me to the power of DNA sequencing technologies.

I also had the good fortune to meet several scientific luminaries and I learned how to focus and work hard. But I was frustrated by the technical limitations of plant biochemistry at that time, so the advent of gene cloning in the late 1970’s got me interested in studying plant genes. I took an indirect route via Agrobacterium genetics due to my interest in microbial genetics.

How and why did you set about making the first transfer of genetic material from one plant to another?

I was thrilled to have the opportunity to carry out post-doctoral research with Mary-Dell Chilton at Washington University in St Louis in 1980.

I took some experience of plant tissue culture and DNA and RNA purification with me, while she and our lab colleagues had a wealth of knowledge and practical skills in Agrobacterium genetics.

Furthermore, a local company called Monsanto was keen to diversify into life sciences and crop improvement. We worked closely with them to develop transformation systems based on selectable markers and ways to express foreign genes in plants.

What made you and your co-workers investigate using Agrobacterium to make the transfer?

The luminaries in the field were Mary-Dell Chilton, Jeff Schell and Marc van Montagu. These scientists provided a strong framework for effective work on plant transformation.

My specific contributions in Mary-Dell’s lab involved identifying ways to make functional chimaeric genes based on knowledge of gene function.

For this work I sequenced large regions of the T-DNA and identified regions transcribed in plants using the newly developed Sanger sequencing methods.

Did your years working more closely with industry at the Plant Breeding Institute influence how you undertake research?

When I started at the PBI in 1982 I worked to make useful vectors for gene expression in plants with the aim of understanding more about the control of gene expression.

I also developed transformation methods for potato and tomato. At that time it was thought that Agrobacterium would not work in grasses such as wheat, so I avoided this area.

My experience of working with industry at PBI was limited to continuing collaboration with Monsanto and also to a lesser extent with Zeneca and Ciba-Geigy.

Attempts at commercialisation of research at the PBI were ineffectual and disrupted rather than supported research. There was little mutual comprehension between my work and breeding activities at PBI. The links between gene function and plant breeding have only been made 20+ years later.

How would you convince a non-scientist of the importance of the weed Arabidopsis?

This is reasonably straightforward for non-scientists; the idea of a lab-rat for plants that is easy to work on and provides a focus more many research activities is clear.

The real challenge came from justifying the relevance and importance of Arabidopsis to colleagues working on crop plants.

There is still incomplete understanding of the importance of understanding the functions of genes, and of the commonality of gene functions, among some plant scientists.

I saw Brachypodium genomics as a temporary stepping-stone to understanding the larger genomes of wheat and barley, which are quite closely related to Brachypodium.

The idea was to sequence a third grass species to map conserved gene order more precisely and project this onto wheat and barley genomic resources. This approach was instrumental in understanding the larger and more complex genomes of barley and wheat, work that was published in 2012.

What are you working on now?

Last year we published an initial draft of the wheat genome. I am helping to refine it using new methods in collaboration with TGAC and colleagues in Munich with the aim of generating a high quality draft genome sequence in the next year.

I am also interested in understanding how the polyploid genome of wheat influences gene expression.

I also have a research project in Arabidopsis that is studying gene networks controlling growth.

What in plant science continues to fire you up and get you out of bed in the morning?

Many things. I enjoy helping to make the John Innes Centre an interesting and supportive environment for science, as I have been extremely fortunate to work with colleagues here who provide continual stimulation, challenge and support.

I look forwards to having better wheat genome resources in the next year, and I am fascinated by the novel regulatory mechanisms involving ubiquitin-mediated control of plant growth that we have uncovered.

Can you describe any practical outcomes you have helped achieve for breeders, farmers and ultimately consumers?

My research has directly influenced the crop biotech industry by providing resources and understanding for GM.

This is now a major international business worth many billions annually. My work on genomics contributes to the foundations of modern breeding and genetic analyses of complex traits in crops. This will be the main approach to crop improvement in the future.

Any influence I have on consumers is indirect at best, as it flows through the biotech and breeding industries.

What would you like to achieve in wheat within your lifetime?

Lots. I want to understand how epigenetic mechanisms shape gene expression and gene change in the polyploid wheat genome.

I want to understand how growth is controlled in response to nutrients and to endogenous mechanisms that set organ and seed size.

Of which achievement(s) are you most proud?

What do you think the FRS recognises in particular?

This comes quite late in my career so I guess it recognises the accumulation of several scientific outputs.