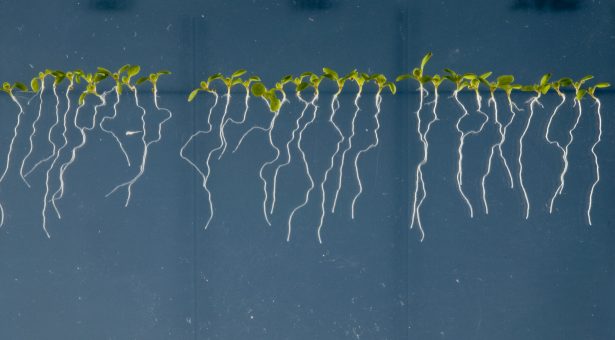 Scientists have identified the genes that control the development of root hairs on plants.

Published in the journal Science, Professor Liam Dolan reports that these genes are also found in moss, a finding that changes our understanding of how the plants we see today evolved over 400 million years ago.

Plants use roots to anchor themselves, and to absorb nutrients.

Root hairs are single cells that grow from the roots and greatly increase the root’s surface area.

The researchers identified a pair of genes that are required for root hairs to grow. When these genes were turned off, plants produced hairless roots.

Not all plants have roots. Evolutionarily ancient plants like mosses instead grow cells called caulonema and rhizoids.

Caulonemal cells increase the surface area for nutrient absorption, and rhizoids provide anchorage. The scientists found that the genes that control root hair growth are very similar to the genes that regulate the development of caulonema and rhizoids in the moss Physcomitrella patens. In fact, they were able to replace the genes they turned off in plants with the equivalent genes from moss, and produce hairy roots.

However, caulonema and rhizoids are not the same as root hairs; the major difference being that root hairs are diploid, having two copies of each chromosome, whilst the moss cells have one (haploid).

The number of chromosomes represents one of the major differences between mosses and other land plants.  Moss exists with one chromosome for the majority of its lifecycle; only during its reproductive stage does it have two copies of its chromosomes.

The plants that evolved from these organisms have pairs of chromosomes for the majority of their life cycle. With this change in the dominant part of the life cycle came an enormous increase in the size and diversity of plants known as the Devonian explosion, which started around 400 million years ago. The great variety of plant life that we see today evolved during this period of time.

The invasion of the land by these plants fundamentally changed the existing ecosystems and brought about pronounced climate change.

This study, involving collaboration with the University of Lausanne, provides some information on the genetic basis of this Devonian explosion.  It shows that genes from one stage in the life cycle were recruited by their descendants into another part of the life cycle.

The development of root hairs helped the evolution of larger plants by increasing their nutrient uptake ability and anchorage.

“These results give us a model for the genetic changes that underpinned the dramatic changes in plant stature that occurred during Devonian explosion 400 million years ago. We are now getting an insight in to the genetic fuse to that bang which had such dramatic climatic consequences” said Professor Dolan.