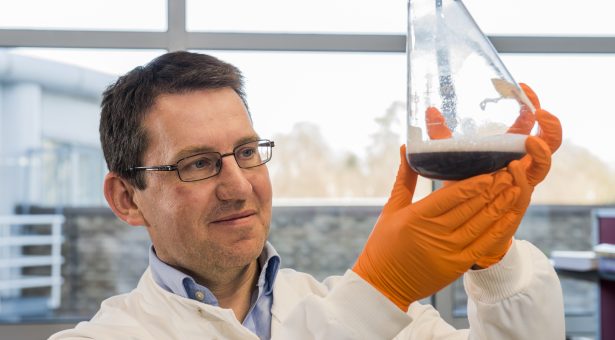 A research collaboration has discovered a new way of rapidly generating a swathe of medically significant natural products after discovering a ground-breaking technique that turns the marathon of evolution into a sprint.

The surprise discovery came when the research team inadvertently replicated a process that bacteria use to evolve their machinery for making natural products.

Now the team, which includes scientists at the John Innes Centre, plan to harness this process to generate “libraries” of valuable compounds created from the technique which they have named Accelerated Evolution.

“For 20 years we have been using rational bioengineering to modify the chemical structures of clinically important natural products – using genetics to make a new molecule in a process that parallels medicinal chemistry – and that’s what we were doing when we stumbled upon this,” said Professor Barrie Wilkinson from the John Innes Centre.

“We have discovered a completely new way of doing things, one that will also teach us how to better bioengineer systems in a rational manner.”

The collaboration was led by Isomerase Therapeutics Ltd, and included the University of Cambridge, Pfizer, Roche and DSTL.

Rapamycin belongs to a medically and agriculturally important class of compounds called Polyketides. Fungi and bacteria produce these compounds to give them a survival advantage, for example to defend against pathogen attack and secure resources in the environment.

As part of their experiment, the team inserted a temperature sensitive replicon into the genome of the host strain, the soil bacteria Streptomyces rapamycinicus.

But instead of the expected result – a new Streptomyces rapamycinicus strain producing a specific new version of rapamycin – they isolated a wide range of new strains that each produced unexpected new molecules. These strains could be further modified leading to hundreds of new, structurally diverse compounds.

The team believe that, by inserting the replicon into the genes responsible for making rapamycin, they inadvertently introduced a genetic instability which activated a DNA repair process called homologous replication.

This caused the host bacteria to “spit” out the replicon from the genome, causing a rearrangement of the rapamycin biosynthetic genes.

Professor Wilkinson explains: “We think this process mimics and accelerates the processes that are prevalent during natural polyketide evolution.”

By setting up a drug discovery development platform to harness the Accelerated Evolution platform, the team believes it is at the beginning of a new age in natural product drug discovery.

Dr Matthew Gregory, a corresponding author of the paper and CEO of Isomerase Therapeutics Ltd, said: “The work described in this paper has important ramifications for the natural products field and synthetic biology generally.”

The discovery is outlined in the journal Nature Communications; ‘Diversity oriented biosynthesis via accelerated evolution of modular gene clusters‘.