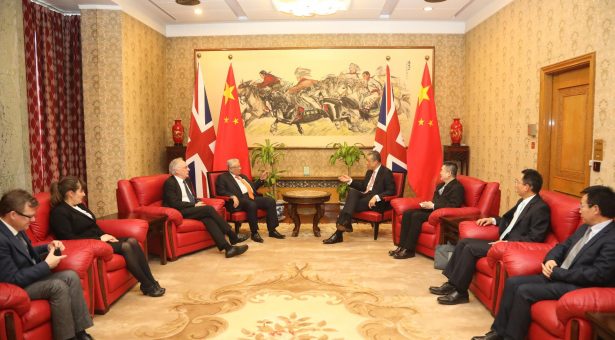 The long-term R-visa allows the holder to travel freely to China for 10 years. The R-visa recognises the sustained collaboration with the People’s Republic of China that Professor Sanders has led over many years, and the expertise that he brings to the cross-cultural scientific endeavour.

Professor Sanders said, “I am proud to receive a 10-year visa: to receive this recognition from the Chinese government is a great honour. For many years I have collaborated with scientists in China, and the recent initiation of the CEPAMS labs in Beijing and Shanghai has been very successful.”

By issuing the China Talent Visa the Chinese government signals its commitment towards working with global talent. It is awarded to foreign high-level personnel, and highly talented people, whose skills are in urgent demand to help the development of the economy and society of China, particularly in the field of research and innovation.

The R-visa is designed to attract leading experts including scientists, technology experts, entrepreneurs and others with skills in high demand, and the ceremony on 3 April 2018, marked the formal presentation of the first few of these visas issued in the UK.

Professor Sanders said the visa highlighted the success of the strategic collaboration which has seen the John Innes Centre join two institutes of the Chinese Academy of Sciences to form the CAS-JIC Centre of Excellence for Plant and Microbial Science (CEPAMS).

Earlier this year Professor Sanders travelled to China using the China Talent Visa to attend the CEPAMS symposium in Beijing. This annual meeting of plant and microbial scientists brings together researchers from the John Innes Centre, the Chinese Academy of Sciences to discuss their work and form new collaborations.

“CEPAMS has assembled the world’s top research scholars to tackle biological issues such as crop yield, food safety and new therapies. With the backing of the Chinese Academy of Sciences and the British Biotechnology and Biological Research Council, we have already made many outstanding achievements and I believe we can continue to address the major societal and environmental challenges that lie ahead.”

His Excellency Ambassador Liu Xiaoming said “This is a great day and I am honoured to be presenting Professor Sanders with this visa. It is important for the Chinese government to forge relationships with British scientists and reflects our commitment to innovation. I appreciate Professor Sanders’ contribution to promoting collaboration in China and look forward to more years of development.”

This visa was made possible by the Shanghai Institute for Plant Physiology and Ecology, who made the application for Professor Sander’s R-visa, and the SAFEA London office gave valuable assistance in making arrangements with the Embassy.

Professor Sanders, a Fellow of the Royal Society, has been director of the John Innes Centre since 2010. His research investigates plant cell signalling and plant nutrition.