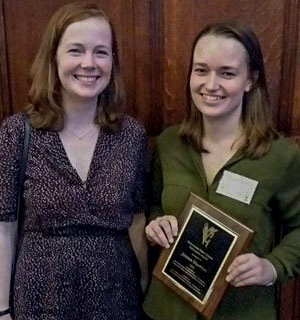 Jemima Brinton, a PhD student in her final year at the John Innes Centre, has been awarded the PhD Monogram Early Career Excellence Award (MECEA) at the 2017 annual MonoGram meeting in Bristol.

Jemima Brinton (R) with Alison Bentley (L) who chairs the Monogram Steering Committee MonoGram award two early career prizes annually to outstanding young scientists and researchers in the field of small grain cereal and grass research in the UK. The awards are given based on research contributions in both basic and more applied disciplines, as well as contributions to scientific outreach and promotion activities.

Alison Bentley who chairs the Monogram Steering Committee presented Jemima with her award. Jemima then presented her findings in a special session at MonoGram 2017 on her work on grain length in wheat.

Jemima, who holds an Agriculture and Horticulture Development Board studentship, studies the mechanisms that control grain length and width in bread wheat with a view to increasing final yield. During her PhD, Jemima has used multiple approaches to address this complex question including looking at natural variation in wheat and inducing variation through mutation.

Jemima said “I am delighted to have received the PhD Monogram Early Career Excellence award. The MonoGram community is very supportive of early career researchers and it was great to have the opportunity to present my work at the meeting itself to a wide range of people, including researchers and breeders.”