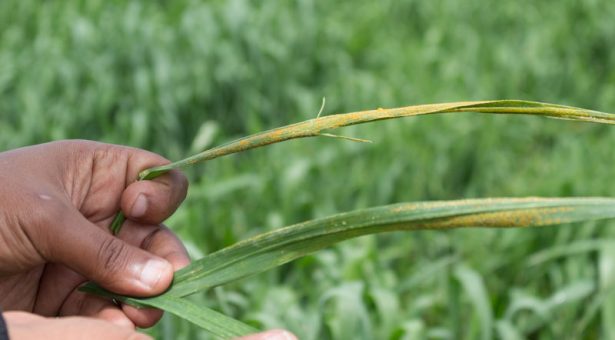 In the mid-20th century, an American scientist named Harold Henry Flor helped explain how certain varieties of plants can fight off some plant killers (pathogens), but not others, with a model called the “gene-for-gene” hypothesis.

70 years later, an international team of scientists describes precisely how a plant senses a pathogen, bringing an unprecedented level of detail to Flor’s model.

“We know that plants have sensors to detect pathogens but we knew little about how they work,” says Professor Banfield from the John Innes Centre.

In a study published in eLife, the team led by Professor Mark Banfield, in collaboration with the Iwate Biotechnology Research Centre (Japan) and The Sainsbury Laboratory (UK), investigated how one sensor protein from rice called Pik binds AVR-Pik, a protein from the rice blast pathogen.

Dr Abbas Maqbool from the John Innes Centre, first author of the study added, “Harold Flor predicted that plant sensors discriminate between different pathogen types, but at the time he had no knowledge of the molecules involved. It is remarkable that his ideas have now crystallised into detailed molecular models.”

Dr Maqbool, Professor Banfield and colleagues went on to discover that the strength at which the Pik sensor binds the pathogen AVR-Pik protein correlates with the strength of the plant’s response. This opens up new avenues for engineering better plant responses against pathogens by building sensors with increased strength of binding to pathogen proteins, and therefore conferring enhanced resistance to disease.

“Once we understand how these plant sensors detect invading pathogens, we can devise strategies to ‘boost’ the plant immune system and help protect rice and other important food crops from disease,” says Professor Banfield.

The project was funded by the Biotechnology and Biological Science Research Council (UK), the European Research Council, the Ministry of Education, Culture, Sports, Science and Technology (Japan) and the Japanese Society for the Promotion of Science.