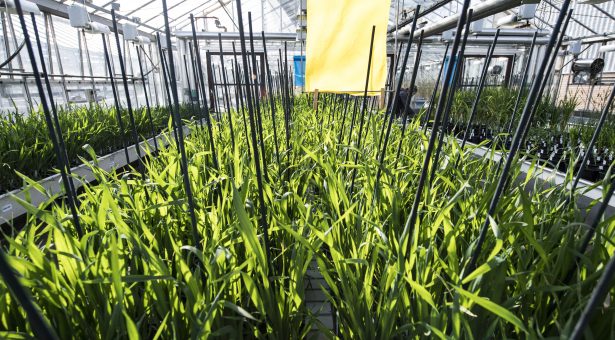 Plants produce a vast array of natural products, many of which we find useful for making things such as drugs.

There are likely to be many other plant natural products that remain undiscovered or under-exploited, and research from the John Innes Centre, which is strategically funded by the Biotechnology and Biological Sciences Research Council (BBSRC), is uncovering more about the genetics and evolution of natural product pathways in plants.

Researchers have recently discovered that the genes producing two of these products in the model plant Arabidopsis are clustered together, which is extremely rare in plants.

An apparent ‘evolutionary playground’ in the plant’s genome seems to have brought the genes together, and knowing how these clusters assemble and are controlled will be important for improving and exploiting the production of new natural products.

Gene clusters are common in bacteria, where genes needed to perform a specific task, such as producing an antibiotic, are grouped together in what are called operons. However in plants and animals, functionally related genes are normally spread throughout the genome.

Professor Anne Osbourn of the John Innes Centre, while studying a natural antimicrobial compound produced by oats, found that the genes that made this compound were in fact clustered.

Her group used the ‘signature’ of these genes’ arrangement to search for other potential clusters, in the model plant Arabidopsis.

Publishing in the journal Proceeding of the National Academy of Science, Professor Osbourn and her colleagues at Stanford University and France’s Institut National de la Recherche Agronomique (INRA) have discovered the second of two gene clusters, both producing triterpene compounds. This allows them to look for common features of the gene clusters, giving new insights into how these clusters evolve.

Bacterial operons swap relatively easily between species, but the Arabidopsis gene clusters didn’t enter the plant’s genomes by this route.

Both of the clusters are found in ‘dynamic’ regions of the genome that are significantly enriched in transposable elements. These areas act like ‘evolutionary playgrounds’ where recombinations happen more frequently, bringing together different genes.

When the gene clusters produce compounds that are useful to the plant, for example in fighting off pests, natural selection favours these clusters.

Crucially, in both of the triterpene gene clusters found by the group, the clusters must be maintained as a whole. Losing one part of the cluster leads to the build up of toxic intermediates. This causes an evolutionary pressure to maintain the cluster as a whole, as this increases the chances of the all of the genes being inherited together.

Clustering also allows the genes to be controlled in a coordinated manner, and comparing the gene clusters gave the scientists hints of how this might happen.

Both gene clusters show signs that they are regulated by the way the DNA molecule folds or unfolds into chromatin, whilst neighbouring genes outside the clusters don’t.

Furthermore, it appears that this level of coordinated gene expression has been acquired by the cluster after its assembly.

These insights into the way these gene clusters have evolved and function will be particularly valuable for efforts to fully exploit the potential of plants to produce valuable products.

The ever-growing amount of data being generated by genome sequencing projects can be explored further, to try to discover similar gene clusters.

For genes that have already been discovered, this information on clustering genes will help in efforts to use synthetic biology to optimise the production of new drugs, herbicides and other plant products.