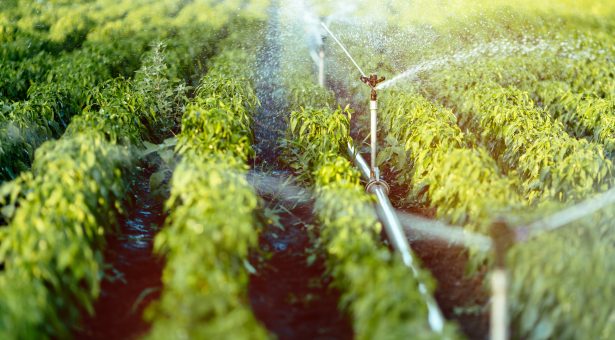 Too much sun, too much heat and not enough water makes us sick. The same goes for plants. Including ones that feed us and our livestock.

Higher temperatures can also make plants more vulnerable to attack. Pests and diseases can become more virulent or are able to survive in new locations. Others become less virulent but the crops become more susceptible to their effects.

In 2003 French wheat yields were down by a fifth and Italian maize yields were down by over a third. Nothing like it had been seen since 1540, the year that Henry VIII got hitched to wives four and five, when a heatwave beginning in April lasted seven months. Such extreme temperatures are likely to become more frequent according to IPCC climate model projections.

In the tropics and subtropics, the highest temperatures recorded so far are highly likely to be below the summer average that will be experienced by 2100.

It is also predicted that every 1ºC temperature rise will cause direct losses in crop yields of 2.5-16%. Further losses are expected from rising sea levels, increased salinity and decreased soil moisture.

Plant scientists are starting to gather evidence on the exact ways in which plants will be affected. Researchers at the John Innes Centre and The Sainsbury Laboratory on Norwich Research Park are starting to unravel how plants respond to temperature and how their interactions with pests and diseases are likely to change.

This knowledge will show us if anything can be done to help plants cope. It may show us if it’s possible to breed crop varieties that are able to adapt.

Scientists at the John Innes Centre have been doing research with plants that emit a gentle glow under heat. One plant luminesced whether it was hot or cold, and this led them to identify the gene that plants use to measure temperature.

They also found that plants change the way their DNA is wrapped according to temperature. As it becomes warmer, plant DNA becomes less tightly packed. This allows genes to be switched on in response to temperature. What they are trying to find out next is whether this is a direct effect of temperature on DNA or is more indirect.

If they can develop a deep enough understanding of the process they hope to be able to breed plants that respond to temperature differently and are less sensitive to temperature shocks.

For farmers, knowing the best time to harvest a crop is crucial for ensuring they get the best quality produce. Many vegetables are harvested just before flowering, or brassicas such as broccoli are harvested with young or developing flower shoots.

How a plant develops is strongly influenced by the length and severity of cold it experiences over the winter. A long period of cold accelerates flowering and scientists at the John Innes Centre are uncovering the genes that control the process.

In one project they are focusing on brassicas, a vegetable market worth £330 million in the UK. Brassicas are grown from Jersey, where the Gulf stream ensures it rarely falls below freezing, to Fife in an area of Scotland where the UK’s record lowest temperature was recorded.

The research will identify whether it will be possible to develop new varieties adapted to varying conditions and year-round demand, for example by breeding for a more predictable flowering time. It will also help breeders plan for warmer winters.

Plants that save water

Plant pores, called stomata, are essential for life. They helped plants make the critical move in their evolution from water to land by enabling them to regulate water loss and take up the gases they need. Stomata are tiny conduits for the Earth’s carbon and water cycles.

In Jordan over half of cultivated land is used to grow wheat. Periodic drought makes it vulnerable but if scientists were able to develop plants that close their stomata when they are starved of water, the plants will be better able to cope. Research at JIC is underway in barley and the aim is to transfer the findings to local Jordanian varieties of wheat.

Keep off our crops

Rising temperatures and increasing drought may be the most obvious threats to agriculture posed by climate change, but the greatest threat to yields could actually be from pests and diseases spreading and becoming more virulent.

The significance of this problem has only recently gained recognition and is an emerging area of research. John Innes Centre scientists are investigating how disease resistance in crops could be undermined and which diseases and insect pests might spread or become more virulent. In one project, a PhD student will identify and study the two pathogens of greatest threat to UK agriculture.

Some insect vectors, such as leafhoppers that spread small bacteria called phytoplasmas, are sensitive to cold and climate change could provide them with more opportunities to spread to new areas.

Plants become more susceptible to disease under warmer growing conditions, even when some pathogens become less virulent. At the moment, the only way to deal with this is by ‘priming’ seeds using agrochemicals.

John Innes Centre scientists are doing fundamental research to better understand the mechanisms involved in the effect of temperature on crops and crop diseases in the hope that they will come up with a genetic solution.

A grass growing on coastal plains in Israel and South Lebanon could hold the key to stopping one of the world’s most threatening cereal diseases: the Ug99 strain of stem rust which is destroying wheat across Africa and moving into the Middle East and Asia.

“The immediate fear in terms of food security is that Ug99 will reach the Northern Punjab in Pakistan and India where nearly a fifth of the world’s wheat is grown,” said Dr Brande Wulff from the Sainsbury Laboratory on Norwich Research Park.

The wild grass is immune to Ug99 and work is underway at TSL to clone several resistance genes and introduce them as a package into wheat.

“We hope to create a formidable obstacle to the pathogen,” said Wulff.

However, many populations of the grass are on the edge of extinction as the land they grow on is prime real estate.

As well as powerful resistance to crop diseases, wild plants can harbour traits for improved human nutrition, higher yields and more efficient use of nitrogen, sulphur and water.

Seed banks around the world are at the front line in preserving biodiversity. The seed collections at the John Innes Centre hold more than 9,500 wild and cultivated wheat varieties, 10,500 of barley, 3000 types of oats and 3,300 peas from around the world.

Some varieties are over 300 years old. They would not have experienced the Mediterranean climate that persisted for much of 1540 but they may be crucial for helping crops cope with the heat waves of the future.