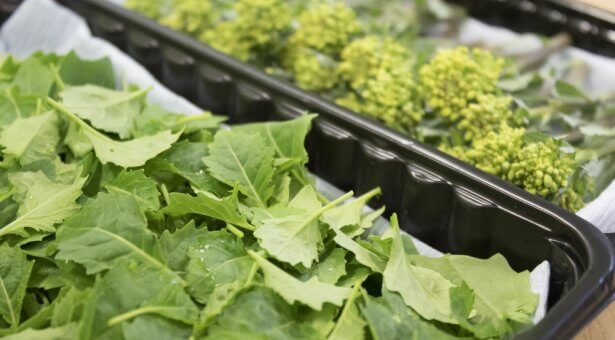 A new variety of broccoli with higher levels of a key phytonutrient is now available in UK shops thanks to experts working on both the biology of plants and the link between human nutrition and health.

The new broccoli, which will be known as Beneforté, was developed from publicly-funded research at two of the UK’s world-leading biological research institutes: the Institute of Food Research and the John Innes Centre.

Scientists at the two institutes, which receive strategic funding from the government-sponsored Biotechnology and Biological Sciences Research Council (BBSRC), are working to develop our understanding of what it is about broccoli that makes it a particularly healthy food.

The researchers used conventional breeding techniques to develop the new broccoli, which contains two to three times the level of the phytonutrient glucoraphanin than standard broccoli.

Glucoraphanin is a beneficial chemical that is found naturally in broccoli and is thought to help explain the link between eating broccoli and lower rates of heart disease and some forms of cancer. Glucoraphanin also leads to a boost in the body’s antioxidant enzyme levels.

“Our research has given new insights into the role of broccoli and other similar vegetables in promoting health, and has shown how this understanding can lead to the development of potentially more nutritious varieties of our familiar vegetables”, said Professor Richard Mithen, of the Institute of Food Research.

“Now there will also be something brand new for consumers to eat as a result of the discoveries we have made.”

British-grown Beneforté broccoli is now available in Marks and Spencer stores around the UK and will become more widely available in other supermarkets during summer 2012.

Science Minister David Willetts said: “This is a fantastic achievement and testament to the quality of research we have in this country and its ability to drive growth. This excellent work has led to the development of a highly commercial food product that will be both grown and sold in the UK, giving a real boost to agriculture, our personal health and the economy.”

Professor Douglas Kell, BBSRC Chief Executive, said:”A body of evidence generated through years of independent public research has helped turn fundamental science into a new product. This is a great example of how our ever-improving understanding of biological processes in both plants and humans can lead, over time, to commercial innovation. What’s really exciting about Beneforté is that it’s something that comes from British scientific research and is available for anyone to buy in the shops and try for themselves.”

Broccoli is the only commonly eaten vegetable that contains meaningful quantities of glucoraphanin. This naturally occurring compound is converted in the gut to the bioactive compound sulforaphane, which then circulates in the bloodstream.

A large body of scientific evidence indicates that sulforaphane is likely to have beneficial effects such as reducing chronic inflammation, stopping uncontrolled cell division associated with early stages of cancer, and inducing antioxidant enzymes.

This research on sulforaphane could explain why people who eat a few portions of cruciferous vegetables such as broccoli every week, have a lower risk of chronic diseases such as cancer and heart disease. Studies at IFR have already shown that eating the new broccoli results in two to four times the level of sulforaphane in the blood compared to normal broccoli.

In collaboration with the Norfolk and Norwich University Hospital, the IFR scientists found that men who ate a broccoli-rich diet experienced changes in the activity of genes associated with tumour survival and growth. These changes were consistent with studies that suggest men who eat broccoli-rich diets have a reduced risk of aggressive prostate cancer. Prostate cancer is the most common non-skin cancer for males in western countries.