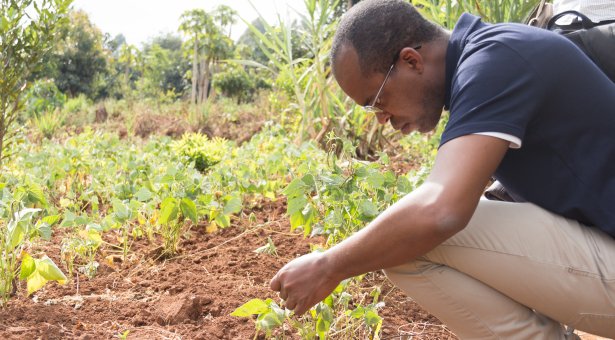 We have strengthened our alliance with Biosciences east and central Africa (BecA) to maximise the impact of our cutting edge science in Africa and to build capacity in the Nairobi-based research hub by supporting African scientists to find scientific solutions to African food security challenges.

In the same week that the UK Government announced new funding for scientific research to achieve international development goals, we welcomed a visit by Professor Appolinaire Djikeng, Director of BecA to agree how both institutes could build upon an already well-established collaboration.

The BecA-JIC alliance works on collaborative research projects and, in doing so, builds agricultural research capacity in the BecA hub and more widely in eastern and central Africa. We have already posted a full-time research scientist to Nairobi as a concrete expression of the alliance’s goal to strengthen research through the mobility of scientists.

Today both institute directors agreed to implement a ten-point programme of collaboration over the next two years including projects on improving food crops using modern breeding techniques, reducing the levels of toxins found in certain African crops and transferring key technology platforms from the UK to Africa.

The UK is poised to play a major role in the global effort to meet this goal by 2030, with overseas development funding protected in tomorrow’s spending review and more funding allocated to scientific research. The scale of the task ahead should not be underestimated given that 795 million people (one in every nine people) in the world are currently undernourished. In sub-Saharan Africa the prevalence of hunger rises to one in every four people.

Increases in agricultural productivity will be key to achieving this goal. While agricultural output per capita has increased steadily in most of the developing world over the last five decades, in sub-Saharan Africa per capita output has been stagnant or even declined during this period.